Lost polar bear wanders 300 miles from its natural habitat: Animal is seen running south in Russia – further and further from its food source

A polar bear has been spotted 300 miles inland from the Arctic coast and running even further away from its natural habitat along an icy road in Russia.

Footage shows the lost predator running in front of a car on a desolate highway heading towards Yakutsk, known as the world’s coldest city.

The polar bear ignored the driver’s attempt to scare it off the road and kept running towards the south – taking it further and further away from its natural source of food.

‘What is it doing here?’ people are heard asking in the car as the bear runs ahead of them in the darkness. 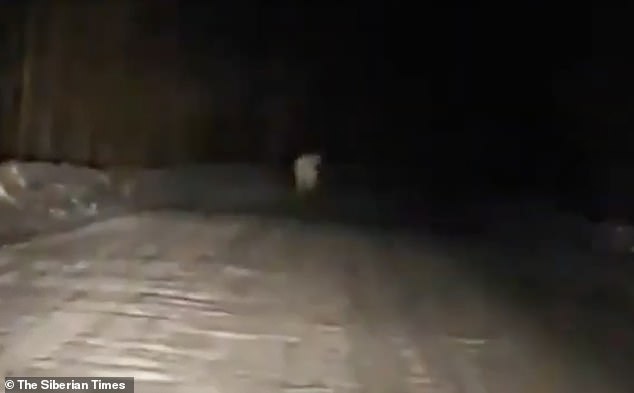 This polar bear stood out in the darkness as it ran ahead of a car on a desolate Russian highway, sparking concerns for its welfare 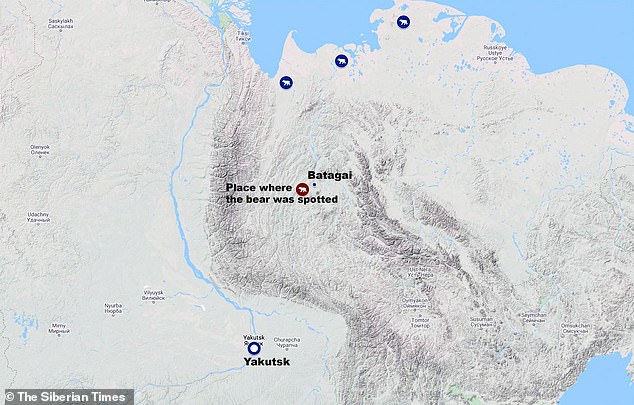 The bear was spotted 35 miles south of Batagai, as shown on this map, far south of its natural Arctic habitat and heading towards the city of Yakutsk

Ecology officials in Sakha, the far-flung Russian republic where the animal was seen, have launched an urgent search to locate and rescue the bear.

‘We have sent inspectors to check the site where the bear was seen,’ said regional ecology minister Sakhamin Afanasyev.

The bear’s tracks were measured and photographed to be shared with experts, said another official, Yakov Sivtsev.

The animal had been spotted 35 miles south of Bagatai in the remote region also known as Yakutia.

‘This polar bear wants to visit the lights of the city,’ one viewer suggested, as it headed towards Yakutsk where temperatures regularly fall below -40F (-40C).

The bear’s journey appeared to be taking it southwards towards the Arctic Circle – the latitude above which the sun never rises on the shortest day of the year, and never sets in midsummer. 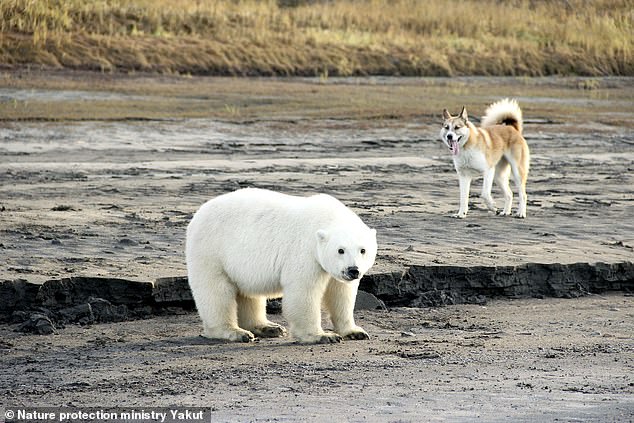 The polar bear, similar to this one, kept running towards the south on a journey that appeared to be taking it further and further away from its natural source of food 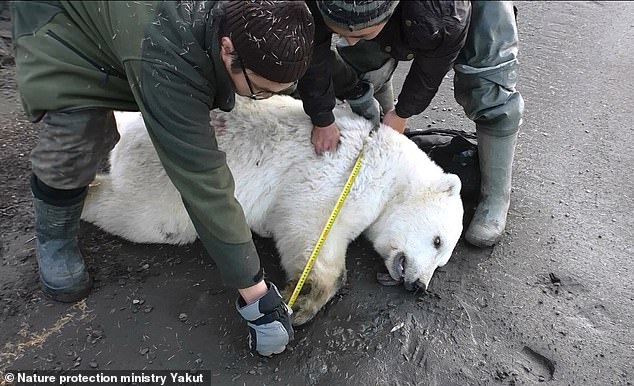 On a previous occasion, a polar bear was caught and taken to a zoo after being found some 450 miles south of Siberia’s Arctic coast

Normally polar bears do not venture far so far inland towards the warmer south, but it is not a unique case.

The last known time a polar bear wandered so far inland was in September 2017.

A ten month old female polar bear cub was rescued in Verkhoyansk district, some 450 miles south from the Arctic coast of Siberia.

Reports at the time said she had lost her mother and was found raiding a fishing processing plant on the Kolyma River.

The runaway bear was caught and passed first to Moscow Zoo, and is now a star attraction at Nizhny Novgorod Zoo.