Ahead of the listing, advisers at Goldman Sachs and JPMorgan had valued the food delivery firm at as much as £8.8billion.

It eventually floated on the stock market yesterday at a still-lofty £7.6billion – making it London’s biggest debut for a decade. 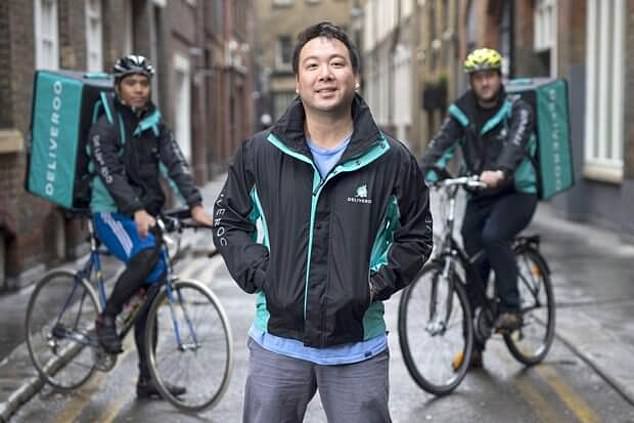 Float flop: Deliveroo was founded in 2013 by former investment banker Will Shu (pictured)- whose own stake in the firm tumbled from £449m to about £334m yesterday

But just minutes after the shares started trading, they crashed from a starting price of 390p to as little as 271p, cutting its market value by £2.3billion.

They eventually closed down around 26 per cent or 287.45p. It makes Deliveroo one of the worst London debuts on record.

One banker described the deal as ‘an absolute car crash’ as analysts said advisers – who billed Deliveroo £49million for their services – had ‘mispriced’ the shares.

However, short sellers betting the stock would fall were also accused of driving the sell-off. The fiasco followed a barrage of criticism from big investors, with Legal & General, Aviva, Jupiter and others boycotting the listing due to concerns about workers’ rights and governance issues.

Many had warned the loss-making firm faces competition from the likes of Just Eat and Uber Eats as well.

And it marked an embarassment for Chancellor Rishi Sunak who had hailed Deliveroo as a ‘true British success story’ as part of a campaign to lure more tech firms to the City.

Neil Wilson, chief analyst at Markets.com, said: ‘Deliveroo was demanding too high a price tag for a loss-making delivery platform in a very competitive space, with a questionable path to profitability.’

Russ Mould, investment director at AJ Bell, agreed that the float had fallen ‘flat on its face’. Asked to comment on the Deliveroo float, one veteran City investor replied with a quote from Wall Street investor Charlie Munger.

‘The investment banking profession will sell s**t as long as s**t can be sold,’ the person said.

‘But I am sure Goldman Sachs and JPMorgan will be able to come up with an excuse for why this isn’t their fault.’

Goldman and JPMorgan were both involved in Aston Martin’s disastrous float in 2018, with Goldman also involved in Funding Circle’s similarly difficult debut the same year.

Deliveroo was founded in 2013 by former investment banker Will Shu – whose own stake in the firm tumbled from £449million to about £334million yesterday.

Ahead of the float, a string of institutional investors denounced its treatment of delivery riders and claimed its business model was not ‘sustainable’. Riders are classified as ‘self-employed’ – meaning they are not entitled to minimum wage, holiday pay or sick leave.

Critics say this means riders can earn as little as £2 per hour, with some investors saying this deterred investment.

Others raised concerns about special shares that would give Shu, 41, outsized voting power for up to three years, while some warned competition in the sector was fierce.

However, former London Stock Exchange boss Xavier Rolet said it reminded him of the ‘wave of cynicism and criticism’ directed at Ocado at the time of its float in 2010 – also one of the worst.

‘This did not prevent this remarkably innovative company from becoming a major success,’ he said. Goldman Sachs and JPMorgan declined to comment.