Malta has become the latest country to welcome British tourists as it says anyone who has had two Covid jabs will be able to enter from June 1.

The small island nation in the Mediterranean said UK travellers who have had both doses of a coronavirus vaccine will be allowed to enter from June 1.

Passengers will need to show their vaccination card before boarding flights, according to the Malta Tourism Authority (MTA).

But the UK is on Malta’s red list of countries, which means non-vaccinated travellers are banned from entering.

Britons who have received two Covid-19 vaccines will able to visit Malta from June 1, the island’s tourism authority has announced

The decision comes after France has already reopened its borders to the UK, with the country named as one of seven where travellers coming from will not have to justify their journey.

Greece will allow tourists who have already had Covid, have been vaccinated or have tested negative on arrival to visit the country from mid-May, while last week Spain said it will lift entry restrictions for UK travellers from March 30, with officials confirming the country would not have its travel ban extended because of the success of the British vaccine rollout.

Tolene Van Der Merwe, director for the UK and Ireland at MTA, said: ‘Malta is a very popular destination for British holidaymakers and is a key contributor to Malta’s economy, so we are excited to welcome back fully vaccinated travellers from the United Kingdom from 1 June. 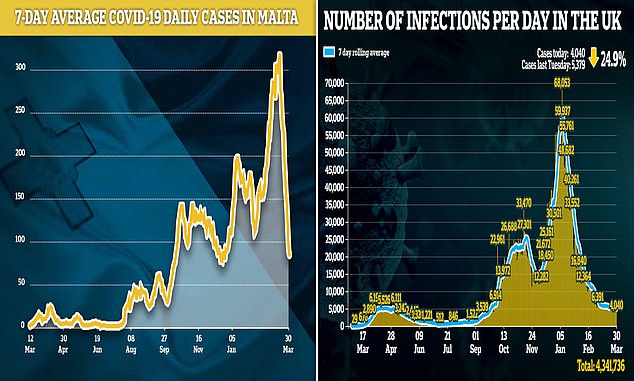 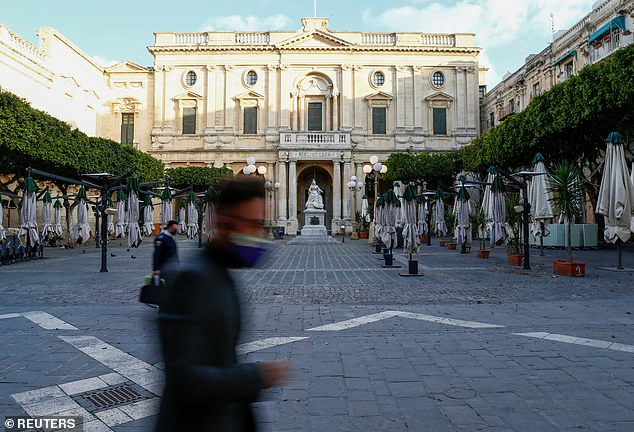 Malta’s decision follows similar moves from Spain, Greece and Turkey, which are all top travel destinations for Brits on their summer holidays

‘The people of Malta are looking forward to tourists returning who have loved our sunshine, culture, food and warm spirit year in, year out.’

Malta is second to the UK in terms of European countries which have vaccinated the largest proportion of their population.

Clayton Bartolo, Malta’s minister for tourism and consumer protection, said: ‘The health and safety of Maltese citizens and tourists will always be our top priority, and, with the continued rollout of the vaccine here in Malta, this focused reopening plan is designed to slowly and safely reopen tourism to fully vaccinated Britons.’

A number of other destinations popular with UK holidaymakers have announced plans to reopen their borders in recent weeks.

Turkey expects to welcome UK holidaymakers without requiring proof of a vaccine or negative test, as soon as foreign leisure travel is permitted.

Greece will require international tourists to have been vaccinated, had a recent negative Covid-19 test or have coronavirus antibodies.

Visitors to Cyprus must have had both doses of a vaccine.

Overseas holidays in the UK are banned due to the coronavirus lockdown, but Boris Johnson will make an announcement on Monday about lifting restrictions.

The Government’s Global Travel Taskforce will provide a report to the Prime Minister on April 12 setting out recommendations for how and when foreign holidays can resume.

Under England’s road map for easing pandemic rules, the earliest that overseas leisure travel could be permitted is May 17.

But there is growing speculation that that date could be pushed back as parts of Europe are seeing rising infections.

Earlier today Ryanair boss Michael O’Leary predicted a removal of all restrictions on flights to Spain, Portugal and Greece, declaring ‘the vaccines are coming, people are going on holiday’.

O’Leary said that whilst it is ‘certainly foolhardy’ to book a getaway in April or May, he believes ‘Europe will catch up’ in June, July and August – allowing for holidays ‘to places like Corfu, Santorini, Ibiza’.

Speaking to Susanna Reid on Good Morning Britain O’Leary said: ‘It would be certainly foolhardy to be booking in April and May.

‘But with the school holidays coming around in June, July and August and the successful rollout of the vaccines led by the UK, Europe will catch up dramatically I believe, in the months of April and May, particularly with the Johnson Johnson vaccine rollouts.’