The French state will become the largest shareholder in Air France-KLM under a rescue deal for the stricken airline.

The government will increase its stake in the carrier from 14.3 per cent to as much as 29.9 per cent.

It will also contribute up to £3.4billion as part of a refinancing plan – £855million of which will come from buying new shares. 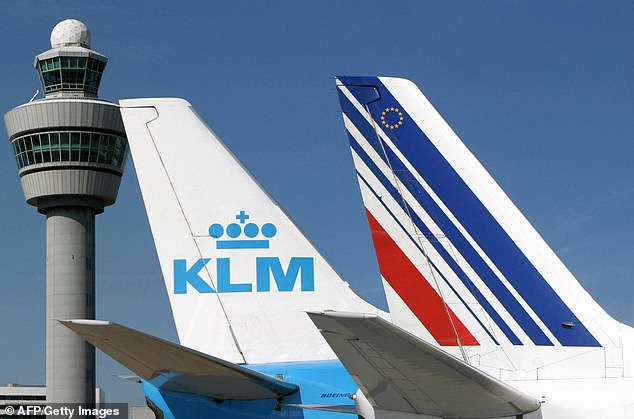 The French The government will increase its stake in Air France-KLM from 14.3 per cent to as much as 29.9 per cent

French finance minister Bruno Le Maire said the deal was a ‘sign of significant commitment’ to the airline and its workers.

The bailout is the closest a European airline has come to being nationalised during the pandemic, which brought global travel to a standstill last year, with new Covid variants and waves of infections causing further trouble.

The EU has backed the funding, which will only benefit the airline’s French arm.

The carrier was formed by the merger of Air France and Dutch group KLM in 2004.

The Netherlands, which also owns 14 per cent, will not take part in the share sale, meaning the size of its stake will fall.

A major ‘sticking point’ between France and the EU in agreeing the new funding was around Air France-KLM giving up some of its lucrative take-off and landing slots at Paris-Orly airport. Up to 18 of these will be distributed to other airlines.

The EU has also said France must work out an exit strategy within a year of the aid being granted, unless it was worth less than 25 per cent of the group by then.

Air France-KLM boss Benjamin Smith said: ‘This gives us stability… despite all the uncertainty that we have in our industry today.’