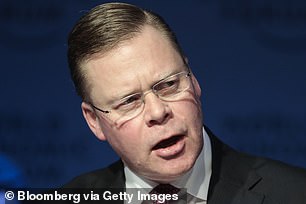 The former boss of British Gas owner Centrica received £650,000 as he departed last year – taking his total pay since 2015 to nearly £13million.

Iain Conn was ousted after an exodus of more than 3m customers and a thumping annual loss, and was replaced in March 2020 by Chris O’Shea.

He also bagged £410,877 while he served out his notice, according to Centrica’s annual report.

His total remuneration since joining in 2015 was £12.9million.

Conn left following a tumultuous period after 10,000 jobs were axed and the shares lost three-quarters of their value.

He blamed financial woes at the time on the Government’s energy price cap.