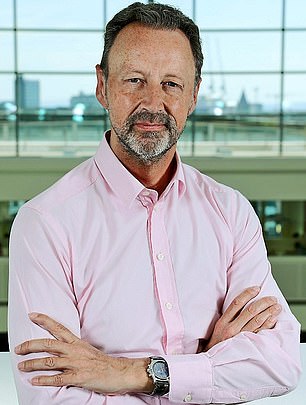 The Co-op will pay bonuses to top bosses despite holding on to £66million of taxpayers’ cash amidst a five-fold rise in profits.

The supermarket chain’s chief executive Steve Murrells confirmed that payouts to him and other executives will be announced in the annual report in the coming weeks. This is despite the group announcing it will only repay a fifth of the Government support it received in the pandemic. In 2020 sales jumped 5.5 per cent to £11.5billion.

This helped profits to rise from £24million to £127million, securing The Co-op’s position as a pandemic winner, even amongst grocery rivals. It received £66million of business rates relief and £15.5million of furlough payments, but yesterday only agreed to repay the cash received under the furlough scheme.

Murrells said: ‘The business rates decision supported by the board and our membership counsel. We need to watch how we use our scarce resources.’

He defended his bonus by saying the decision was taken by the board, and that he is just one of 8,000 managers who will benefit from the scheme.

The decision is likely to anger members of the mutual and many of its 63,000 staff, who may believe the move to withhold rates undermines its ethical stance and promise to ‘do the right thing’.

More than £3billion of the overall cost of the business rates holiday between April 2020 and March 2021 went to ‘essential retailers’, which remained open during the pandemic.

More than a dozen major chains, including the four biggest supermarkets, pledged to repay £2.16billion of this, significantly reducing their profits.

But Co-op said it needed to ‘rebuild its balance sheet’ and pay for £84million of Covid-related costs.

Robert Hayton, UK president of property tax at Altus Group, said: ‘Some parts of the retail sector thrived during the pandemic and the rates holiday was the icing on an already very sweet cake.’