This was the chaotic scene in Pakistan last night as thousands of travellers raced home to the UK to beat today’s hotel quarantine deadline as cases spiked in the country.

Airline staff were forced to stand on check-in desks and urge people to form in orderly lines with one person in the scrum as ‘the worst experience ever’.

Others thought it was ‘odd’ that nobody was having their temperatures checked before flying, although they needed to show evidence of a negative Covid test and must take further tests on days two and eight after arrival.

But crucially those who flew in to the UK before 4am today will not have to fork out £1,750 for eleven nights of quarantine in a Government-approved hotel – and can self-isolate from home.

One family from Buckinghamshire were refused their seats on a flight back to the UK despite arriving at check in three hours early.

Imran Khan from Aylesbury was at Lahore Airport for a British Airways flight with nine children, including three babies and one disabled lady in a wheelchair.

They were told that it was closed even though they said they arrived at 11pm for their flight which took off at 1.45am on Thursday.

There were 15 family members from Kotli Kalan, SalehKhana, District Nowshera and also Aylesbury who spent £15,000 to get back to the UK. 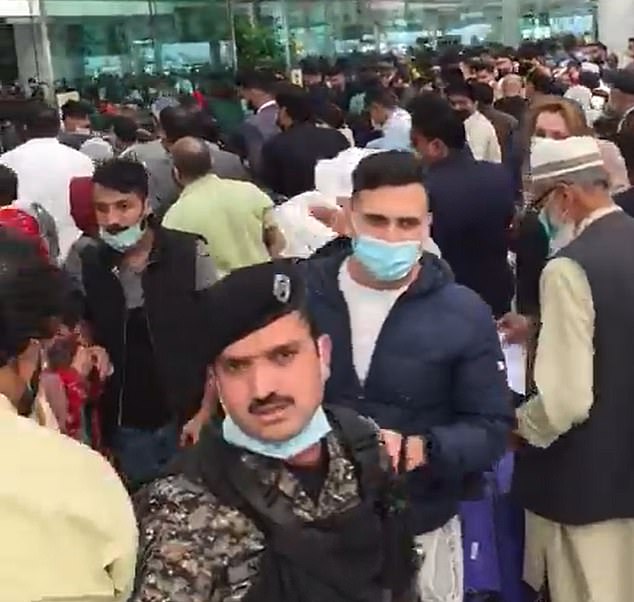 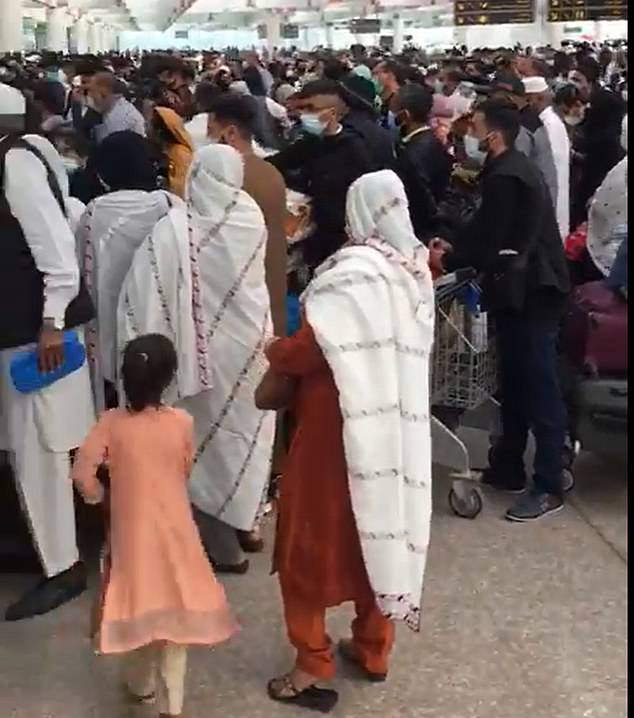 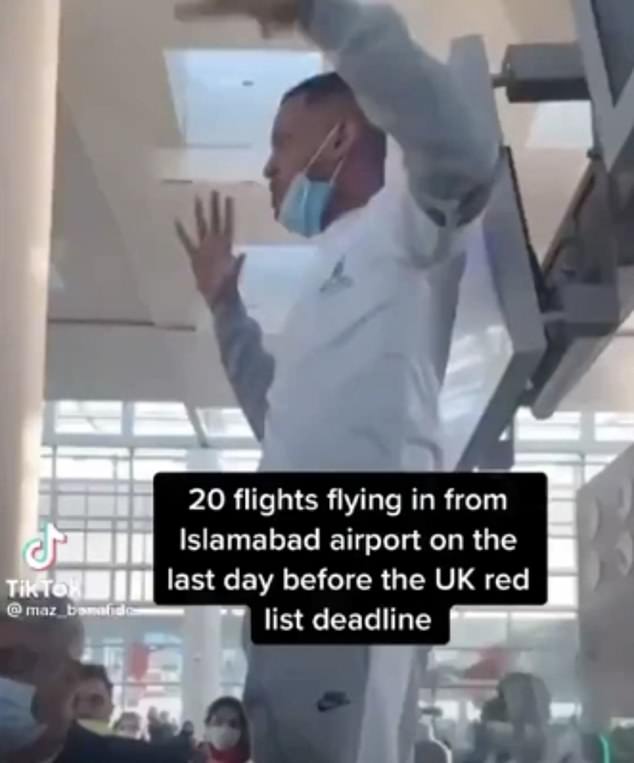 More than 20 flights are understood to have been chartered to return to the UK from Islamabad, Karachi and Lahore in the past 24 hours.

But with thousands more still in the country, Labour MP for Bolton South East, Yasmin Qureshi, urged Boris Johnson to lay on chartered flights for stranded citizens in Pakistan.

Her intervention came following reports of large groups of British Pakistanis, many of them from the Greater Manchester area, were flying to the south Asian country for family weddings.

The British Pakistani population numbers more than one million and people travelling for the celebrations have been blamed for spreading infection there.

More than 5,300 new Covid cases were recorded in Pakistan on Wednesday and a third spike is being driven by the variant first detected in Kent. 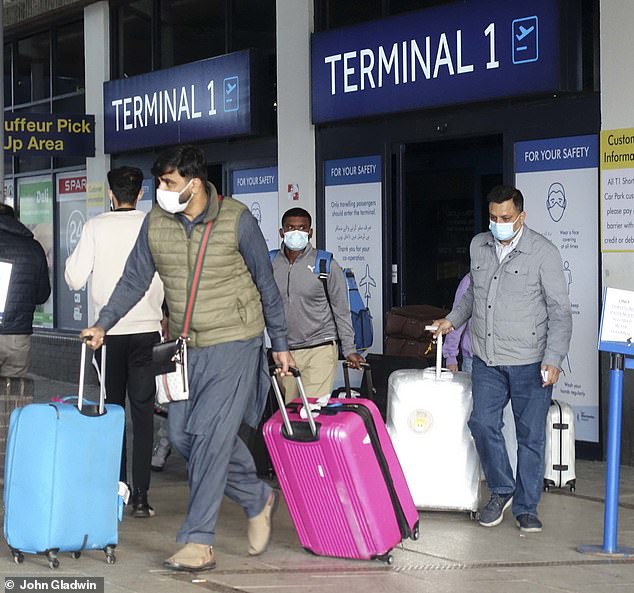 Thousands of travellers were yesterday facing a race home from Pakistan to beat today’s hotel quarantine deadline. (Above, the last Pakistan flight from Islamabad, into Manchester, before the new quarantine regulations are implemented) 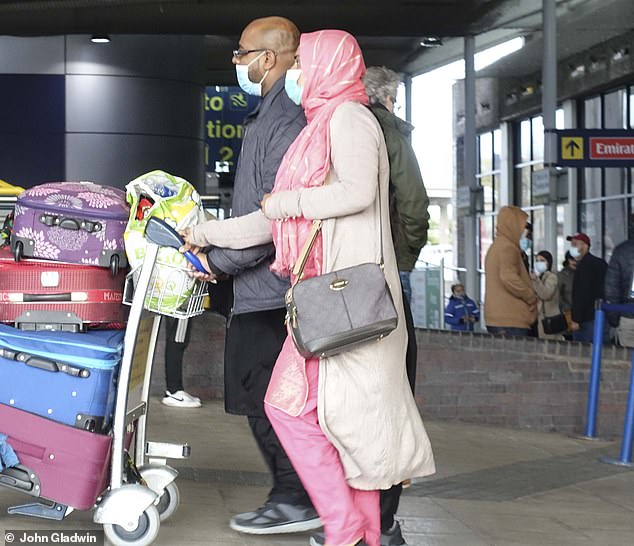 Airlines laid on extra flights after Pakistan was added to the travel ban ‘red list’ of countries last week. It means all arrivals landing in the UK from there after 4am today will have to pay £1,750 for 11 nights of quarantine in a Government-approved hotel. (Above, Manchester arrivals)

Polish-registered carrier Enter Air was among the airlines cashing in on the surge in demand, laying on three Boeing 737s which flew from Islamabad via Moscow to Birmingham yesterday.

According to data from the website FlightRadar24, five flights were scheduled to land in England direct from the Pakistani capital Islamabad yesterday.

Two BA flights were due at Heathrow along with a Virgin Atlantic flight, while two PIA services were scheduled to land in Manchester. A BA service also flew direct from Lahore.

Bulgarian airline GullivAir laid on an Airbus A330 from Islamabad, via Bulgarian capital Sofia, to Birmingham.

A Boeing 767 was flown by Icelandair from the Pakistani capital to Heathrow and Spanish carrier Wamos Air was scheduled to charter a flight from Islamabad to London Stansted. 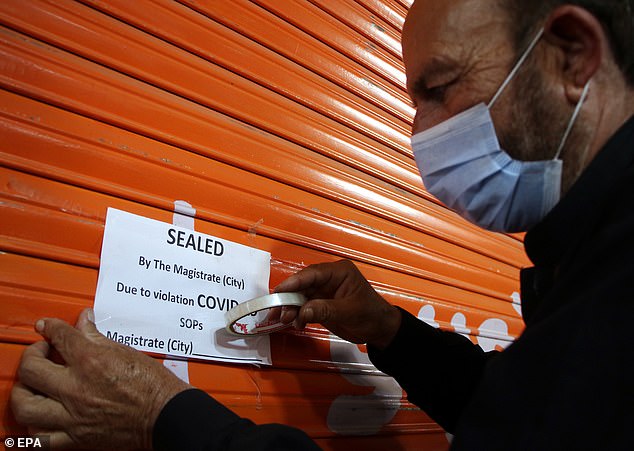 Thousands of British Pakistanis have been flying to the country for family weddings. They have been blamed for a third Covid spike there, driven by the variant first detected in Kent. (Above, a Pakistani security official seals a restaurant for violating Covid rules) 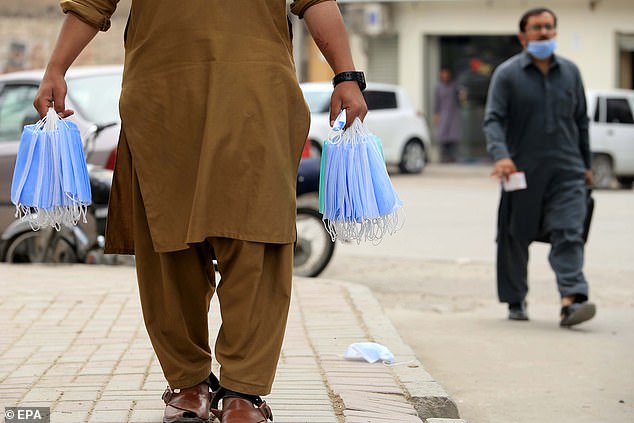 Dozens of Labour and Tory MPs, many of Pakistani and Bangladeshi heritage, have signed a letter to Boris Johnson raising ‘major concerns’ about Pakistan being added to the red list. (Pictured, a vendor sells protective masks on a road in Peshawar)

Some of the last-minute seats were going for more than £1,400.

Analysis shows at least 30 extra flights from Pakistan have been laid on over the last week, with up to 7,000 arrivals on top of the normal numbers.

According to a recent BBC North West Tonight report, around 32,000 travellers flew from the UK to Pakistan in January alone.

Of these, nearly 15,000 are said to have flown from Manchester, almost half the number that flew last January before the pandemic began.

Many are thought to have travelled for weddings, including a woman from Manchester featured in the BBC programme who posted a video of herself online apparently attending a wedding in Lahore.

According to a translator, in the clip she said that people had become stressed out by Covid in the UK and that she thought ‘I’ll get away from all of that by coming here to enjoy myself’.

Foreign travel is currently illegal in Britain but is allowed in special circumstances such as for work or to study.

Travelling to get married or to attend the wedding of a close relative is allowed under exceptional circumstances.

After the ban was announced last week, Rukhsar Ahmed tweeted: ‘Too many UK people including my own relatives travelled for weddings but it has caused a third wave of coronavirus in Pakistan.’

Sohail Anjum posted: ‘Should have put this ban in ages ago. A friend travelled to Pakistan last year for a family wedding and came back infected.’

The Philippines, Kenya and Bangladesh also joined the red list at 4am this morning.

Dozens of Labour and Tory MPs, many of Pakistani and Bangladeshi heritage, have signed a letter to prime minister Boris Johnson raising ‘major concerns’ about Pakistan being added to the red list.

They claim there’s a ‘lack of available data and evidential and scientific reasoning’ behind the move and that countries with higher infection rates have not been added.

They wrote: ‘The vast majority would have travelled to visit family, including elderly relatives, whom they have not seen for over a year.

‘They would already have paid for return flights but are now in a position where they will have to pay for new flights in order to return before the ban is put in place.’

It was co-authored by Yasmin Qureshi MP, Chair of the all-Party Parliamentary Group on Pakistan.

Countries are added to the list, which consists of 39 countries mostly in south America and southern Africa, due to their links with concerning Covid variants.