Ukraine’s president has warned Vladimir Putin ‘millions of lives are at stake’ if conflict erupts between the countries.

Volodymyr Zelensky told the Russian leader he wanted to meet in the centre of the warzone in the Ukrainian Donbass.

It comes after Russia insisted it has the right to restrict foreign naval ships’ movement off Crimea, rejecting international criticism amid Western worries about a Russian troops buildup near Ukraine.

Ukraine last week protested the Russian move to close broad areas of the Black Sea near Crimea to foreign navy ships and state vessels until November. 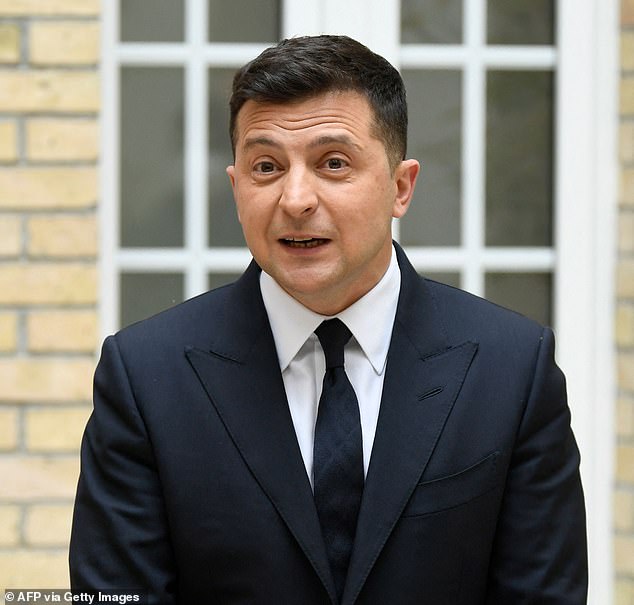 The US also aired its concern Monday, with State Department spokesman Ned Price saying ‘this represents yet another unprovoked escalation in Moscow’s ongoing campaign to undermine and destabilise Ukraine.’

Price noted that the move ‘is particularly troubling amid credible reports of Russian troop buildup in occupied Crimea and around Ukraine’s borders.’

The European Union also voiced concern about the troop buildup and the navigation restrictions.

He said restrictions would not interfere with commercial shipping, according to Russian news agencies.

In a separate move, Russia on Tuesday also announced restrictions on flights near Crimea for five days starting Tuesday. 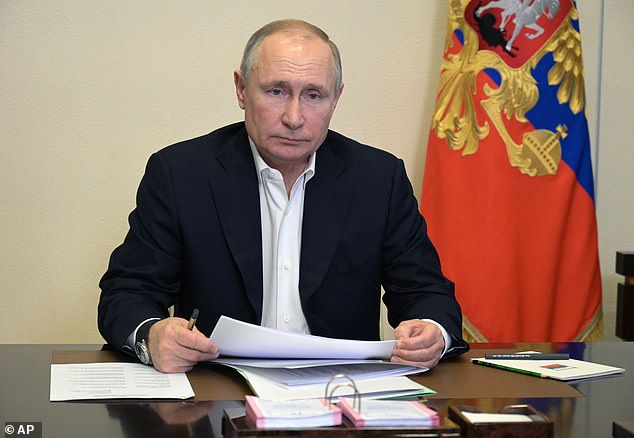 It comes after Russia insisted it has the right to restrict foreign naval ships’ movement off Crimea, rejecting international criticism amid Western worries about a Russian troops buildup near Ukraine. Pictured, Vladimir Putin on Monday

The Russian military is holding massive Black Sea manoeuvres this week, involving more than 20 warships and dozens of aircraft.

Russia annexed Ukraine’s Crimean Peninsula in March 2014 after the country’s former Russia-friendly president was driven from power by protests.

Moscow then threw its weight behind separatists in eastern Ukraine, and the conflict there has killed more than 14,000 people in seven years.

Tensions have risen in recent weeks with increasing violations of a cease-fire in eastern Ukraine and a massive Russian troop buildup along the Ukrainian border.

Moscow has rejected Ukraine and Western concerns, arguing that it’s free to deploy its forces and claiming they are not threatening anyone. 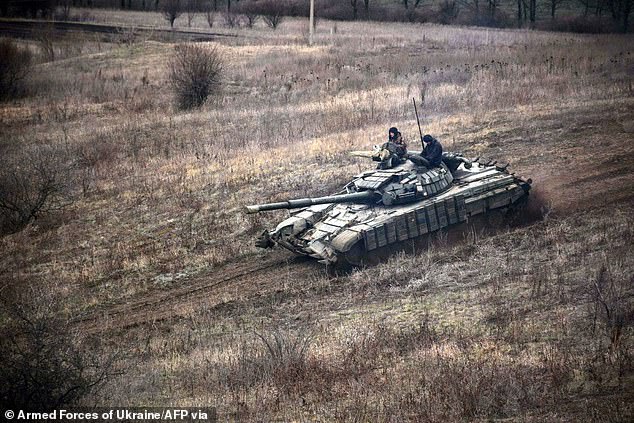 But at the same time, Moscow sternly warned Ukrainian authorities against trying to use force to retake control of the rebel east, noting recent statements by Ukrainian military officers who held the door open for an offensive.

The Kremlin said Russia could be forced to intervene to protect civilians in the region.

Mr Shoigu accused Ukraine of trying to destabilize the situation in eastern Ukraine and lashed out at the US and NATO for what he described as ‘provocative actions’ in the Black Sea area.

The US and its NATO allies have regularly sent navy ships to the Black Sea and the US flew strategic bombers over Ukraine, vexing Moscow. 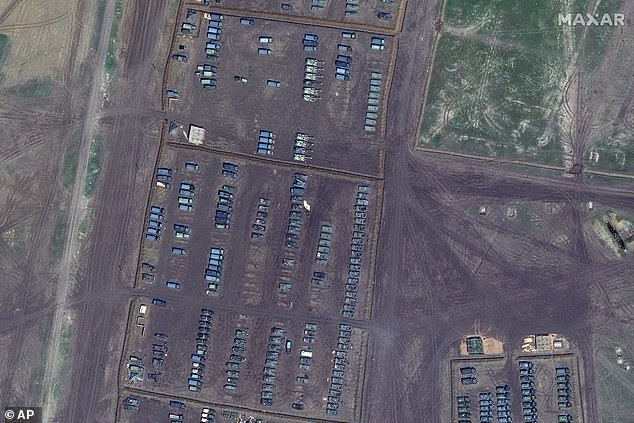 This image provided by Maxar Technologies shows overview of tanks, self propelled artillery and armoured vehicles at Opuk training area at the Black Sea coast of Crimea

However, the US reversed a planned deployment of two destroyers in the Black Sea earlier this month amid the heightening tensions.

The Russian military has conducted a series of drills in southwestern Russia, in Crimea and other areas.

On Tuesday, a pair of Tu-160 nuclear-capable strategic bombers flew over the Baltic Sea for eight hours, and the Northern Fleet conducted massive maneuvers in the Arctic, the Defence Ministry said.

President Zelenskyy, who previously Russian counterpart Putin was refusing to take his calls, offered the Russian leader a meeting in eastern Ukraine to defuse tensions.

‘Ukraine would never start a war, but would always stand until the end,’ he said in a video address. 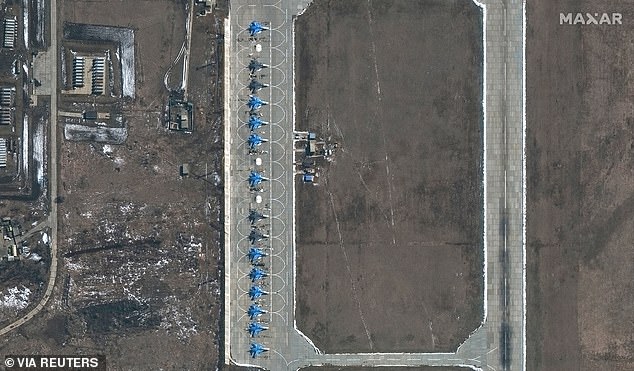 ‘No, Ukraine is not planning any offensive, military escalation or provocations,’ he said at a news conference, adding that ‘we are making every effort for a diplomatic and peaceful resolution of the conflict.’

Kuleba said the Russian buildup across the border is continuing and is ‘expected to reach a combined force of over 120,000 troops’ in about a week. He urged the West to beef up sanctions against Moscow by targeting entire sectors of the Russian economy.

On Monday, the EU’s foreign policy chief, Josep Borrell, told reporters there are ‘more than 150,000 Russian troops massing on the Ukrainian borders and in Crimea,’ and doubled down on the figure later before his services had to correct it in the transcript, saying the real figure was over 100,000.

Recent satellite images showed hundreds of Russian military vehicles stationed at multiple bases, firing ranges and field camps along the border with Ukraine and dozens of warplanes parked at air bases in southwestern Russia and Crimea.