Millions of Western Australians have been plunged into a three-day lockdown after two local cases of coronavirus.

From midnight residents in the Perth and Peel region will be locked down until Tuesday morning, meaning Anzac Day dawn services are cancelled.

Pubs and restaurants can only supply take away food and residents can only leave home for essential reasons such as exercise and medical care including a vaccination.

Masks must be worn form 6pm tonight even though the lockdown doesn’t kick in until midnight to allow police time to set up checkpoints. 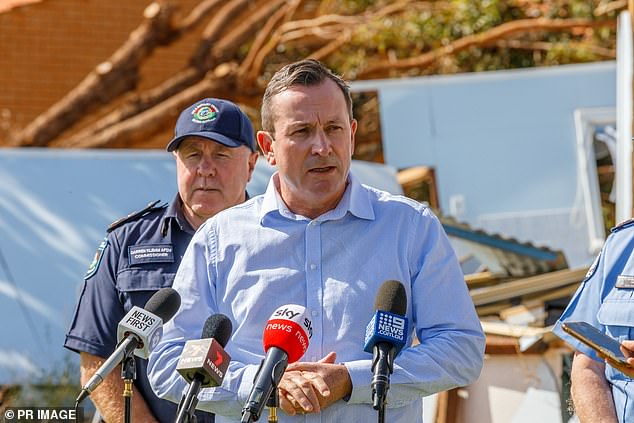 Premier Mark McGowan revealed the man, who had travelled from Shanghai, left quarantine on April 17, stayed with a friend and her two children in Cardinia and went to Elysian restaurant that night.

The friend had a rapid Covid test today and returned a positive result.

On April 18 the Victorian case visited a swimming pool in the southern suburbs.

He had a coffee and dinner in Northridge and stayed at Saint Catherine ‘s college at WA University.

On April 19, he visited a Chinese traditional medical doctor, went to Northbridge again and again stayed at Saint Catherine’s college that night.

The next day, he visited Kings Park and Northbridge again. On April 21 he had breakfast in a common area at Saint Catherine’s college before being driven by his friend to the airport.

He boarded a flight QF778 from Perth to Melbourne at 1.05pm that afternoon and tested positive despite not having any symptoms.

Genomic testing has confirmed the virus spread in the corridors of the hotel from a couple who had returned from India.

The man was staying in the room adjacent to the couple.

A pregnant mother and her four-year-old daughter who were staying across the corridor have also tested positive and remain in quarantine at the hotel.

It will instead transition to a ‘low-risk’ quarantine hotel for a flight-load of seasonal workers expected to arrive from Tonga and Vanuatu next month.

Documents released by the government have revealed the extent to which it was aware of risk factors at its quarantine hotels.

Chief Health Officer Andy Robertson received a report on April 8 which identified three hotels – the Mercure, the Sheraton Four Points and Novotel Langley – as being ‘high risk’ for ventilation issues.

Dr Robertson wrote to the premier last Friday advising that the Mercure was the highest-risk of the three hotels and it should no longer accommodate returned travellers.

The mother, who is six months’ pregnant, and her daughter at the Mercure returned positive tests that day.

In his letter to the premier, Dr Robertson said the risks could be mitigated by changes such as installing HEPA air filters in rooms with positive cases.

‘Assessment of the three higher risk hotels indicates that the Mercure Hotel is probably the most difficult to mitigate, given positive pressure rooms, opening windows and the age of the facility,’ he wrote.

The ventilation report was commissioned after a security guard at the Sheraton contracted COVID-19 in January, prompting a five-day lockdown.

Australian Medical Association WA president Andrew Miller said it was unacceptable that previously healthy travellers had contracted the virus within hotel quarantine, something which has also happened in other states.

He said the federal government’s refusal to consider his proposal to shift returned travellers into Commonwealth facilities such as military bases or detention centres had left states running ‘imperfect’ quarantine hotels.

Guests who had stayed on the same floor at the Mercure have been re-tested and directed to self-isolate until cleared.

The floor has been cleared of guests.