A video appearing to show a group of migrants crossing from Calais to Dover in a boat has been posted on TikTok, as the number of asylum seekers who have crossed the English Channel so far this year surpassed 4,000 today.

The short clip posted yesterday by a man named Sada Halak showed a group of men in a dinghy, some wearing face masks and lifejackets, and was captioned with the phrase ‘unsuccessful challenge’ and three crying emojis.

The video emerged as the number of migrants who have crossed the English Channel so far this year hit 4,016 – with nearly a quarter of them, 857, completing the journey on calm seas in just the past six days.

MPs have urged France to take back asylum seekers caught crossing in small boats as people smuggling gangs take advantage of the warm and settled weather to send hundreds of would-be asylum seekers to Britain.

At least 13 migrants were brought ashore to Dover Marina in Kent on the first boat this morning, including one wearing an expensive ‘Anti-Social Social Club’ jacket who was pictured being led away by a Border Force official.

The man’s jacket, officially called a ‘2016 Anti Social Social Club ‘No Expectations’ black button flannel’, is by the Los Angeles brand and is available online for between £92 and £175, but cannot be bought new from the retailer.

A second group of migrants were then photographed arriving at Dover later in the morning today, with at least 36 seen on the Border Force boat Hunter – including two young children, who were helped to shore by officials.

So far in 2021, the total number of migrants to reach the UK stands at well over double the running total at the same point last year, of 1,737. The 2021 total includes 157 people arriving yesterday, but not today’s arrivals.

Last month saw 1,619 migrants make the perilous journey – up 118 per cent on the 741 who arrived in May last year. This figure included 336 migrants reaching Britain aboard 19 boats last Friday – the busiest day of the year so far.

The Home Office confirmed a further 132 people reached the UK aboard small boats on Tuesday. Eyewitnesses had reported another 50 arrivals yesterday morning, before the total for yesterday was later confirmed as 157.

A flurry of late crossings yesterday saw a lifeboat called out to help deal with at least two boats. Families and many young children were rescued, and some were seen waving as they were brought into Dover Marina for processing. 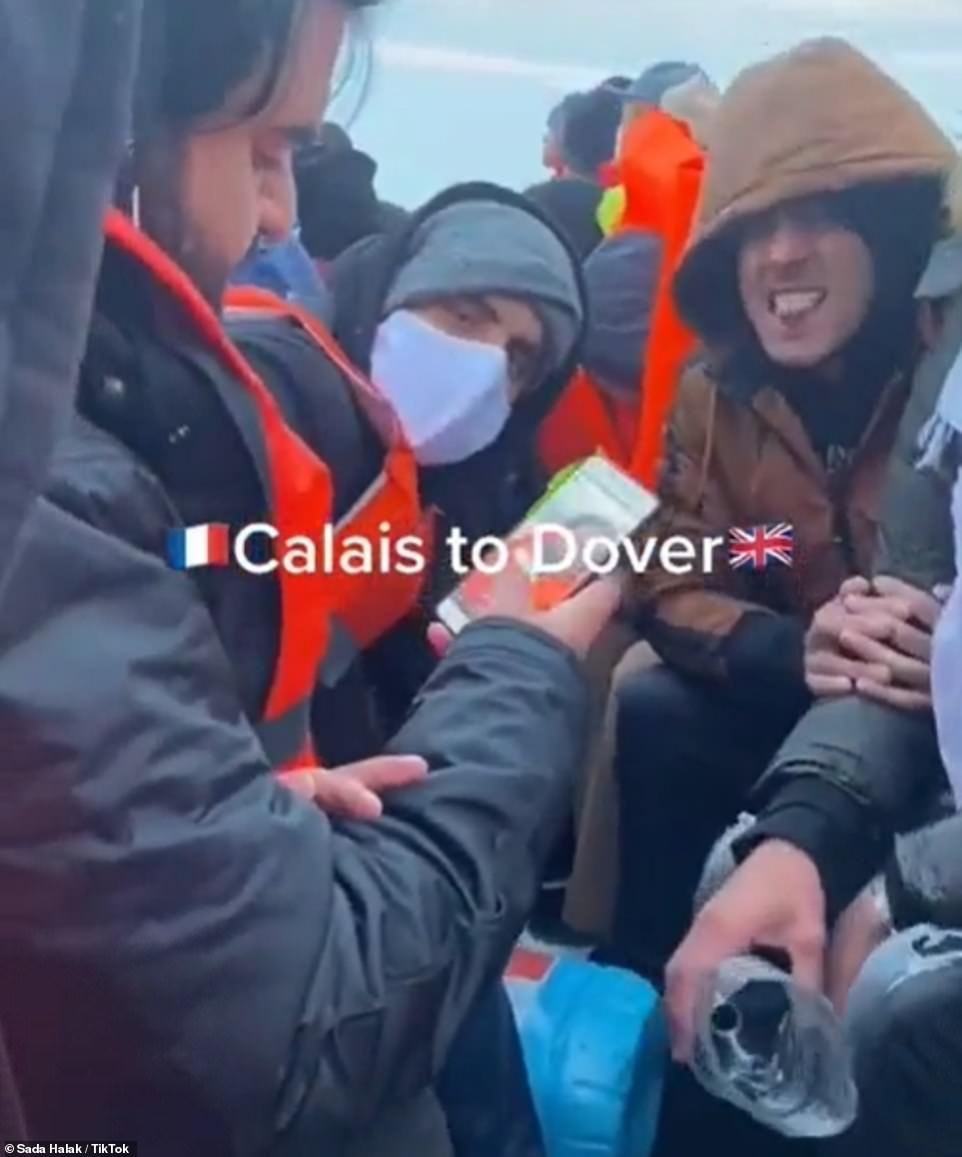 The short clip posted yesterday by a man named Sada Halak showed a group of men in a dinghy, some wearing face masks 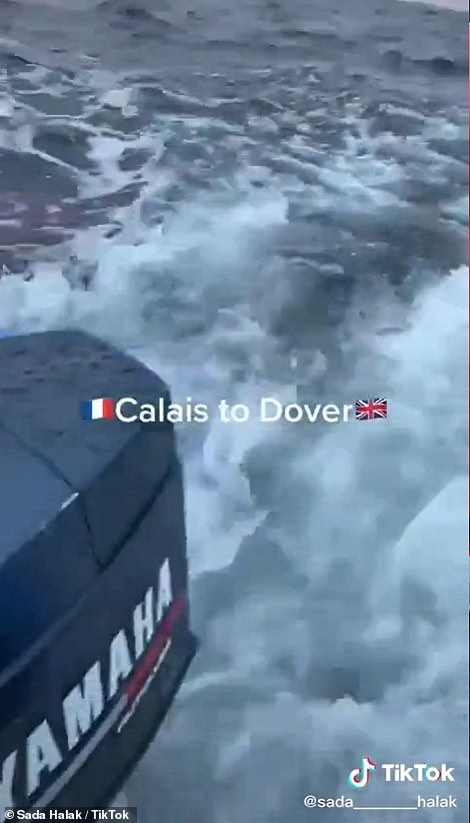 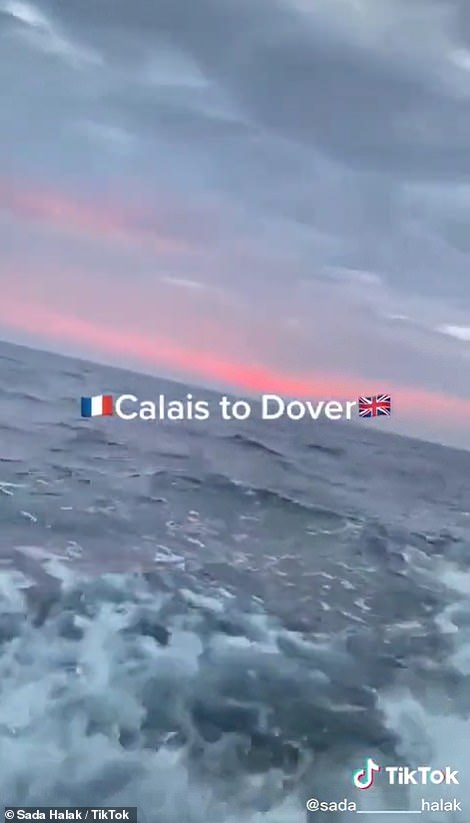 The clip has since been liked 18,000 times and attracted 24,000 comments with the most liked saying ‘go home, we are full’ 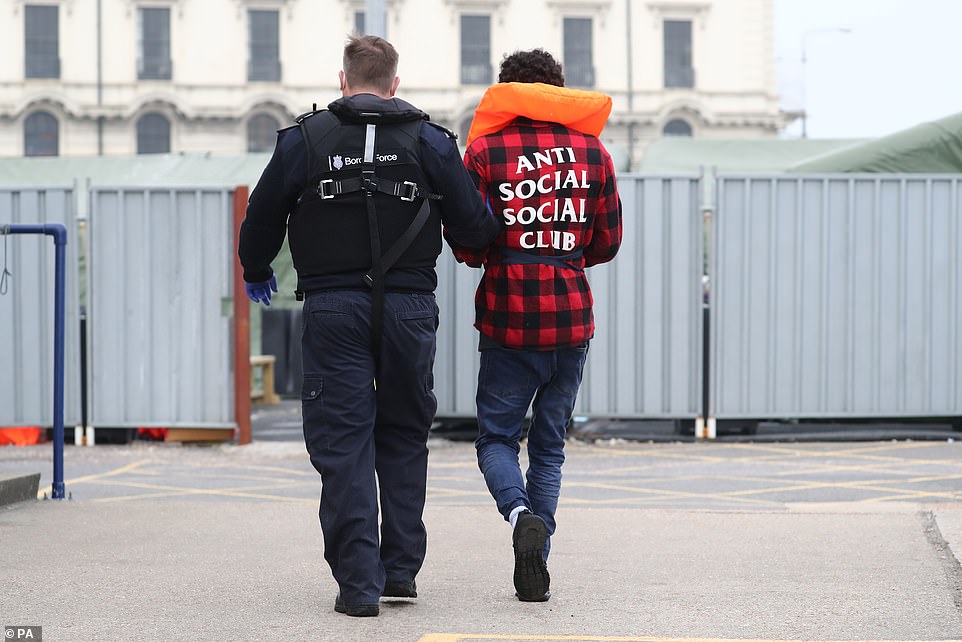 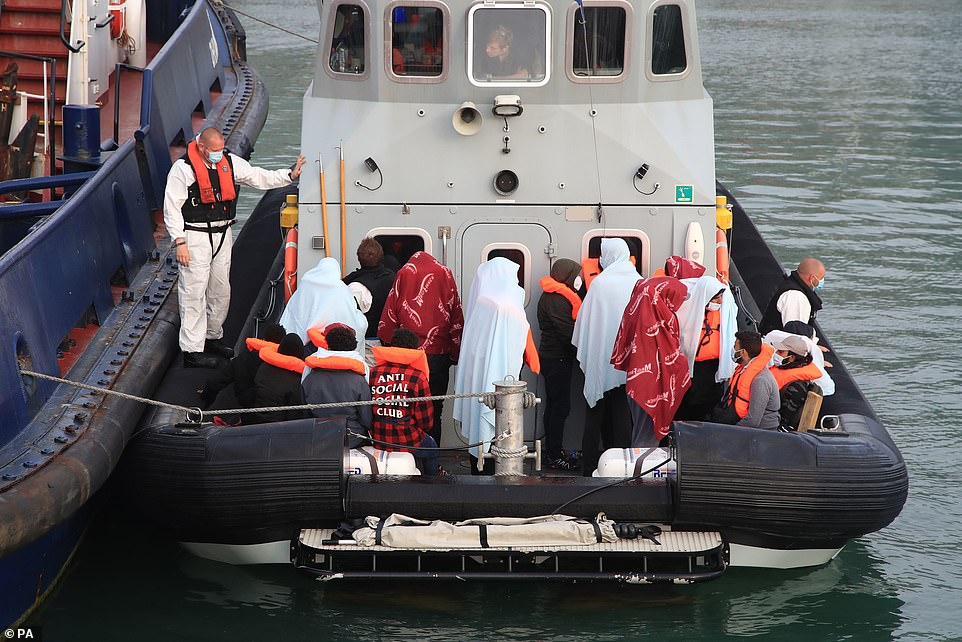 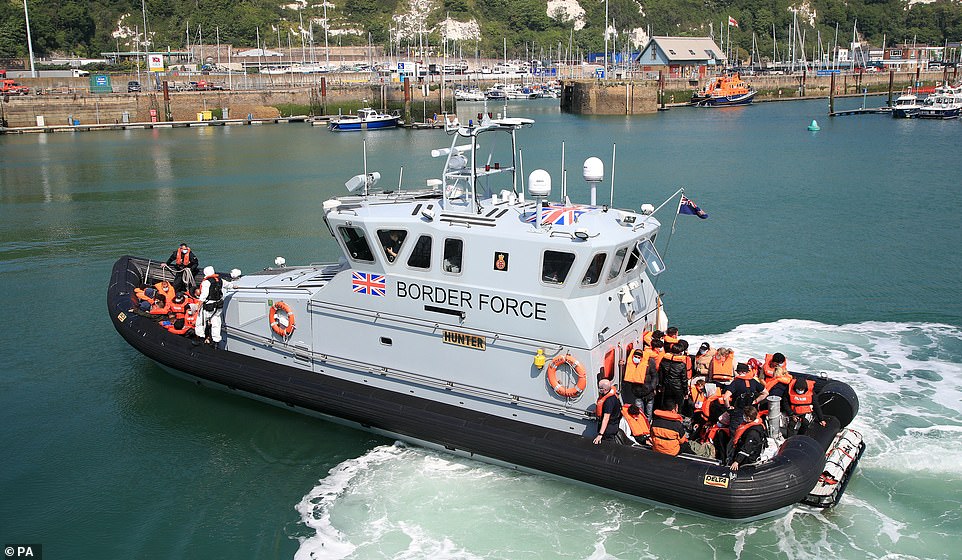 There were also 144 arrivals recorded on Saturday, 17 on Sunday and 71 on Bank Holiday Monday. That brought the total number of migrants to 857 from last Friday to yesterday.

Conservative MP for Dover Natalie Elphicke said: ‘Urgent action must be taken to stop these crossings.

How many migrants have arrived in recent days?

The number of migrants crossing the English Channel in small boats over each day of the past week is:

CONFIRMED TOTAL: 857 (From Friday to yesterday)

‘That means tackling the criminal gangs at source, doing more to stop the small boats leaving France in the first place, turning them round in the Channel, and swiftly returning people who have entered the country through an illegal route of entry.

‘The Government’s new border system plans are straightforward and sensible but we also need more and firmer action now.’

Home Secretary Priti Patel has vowed to make illegal immigration across the Channel ‘unviable’ – but numbers are continuing to soar.

Yesterday, the first two boats carrying about 20 migrants were brought into Dover Marina, in Kent, shortly before 8am on the back of the UK Border Force cutter Hunter.

Another boat containing around 15 was intercepted shortly afterwards floating just a few hundred yards from the White Cliffs of Dover. Border Force cutter Alert brought around 15 more migrants to harbour at around 9am.

A Home Office spokesman said: ‘Criminal gangs are putting profits before people’s lives through these dangerous and unnecessary crossings.

‘More than 3,500 people have been prevented from making the dangerous crossing so far this year and we are cracking down on the despicable criminal gangs behind people smuggling. Inaction is not an option whilst people are dying. 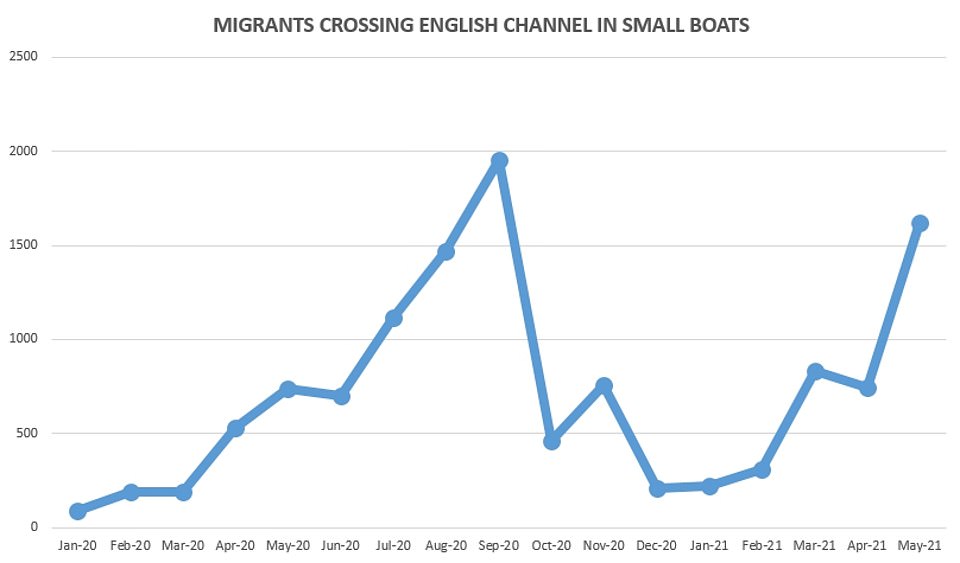 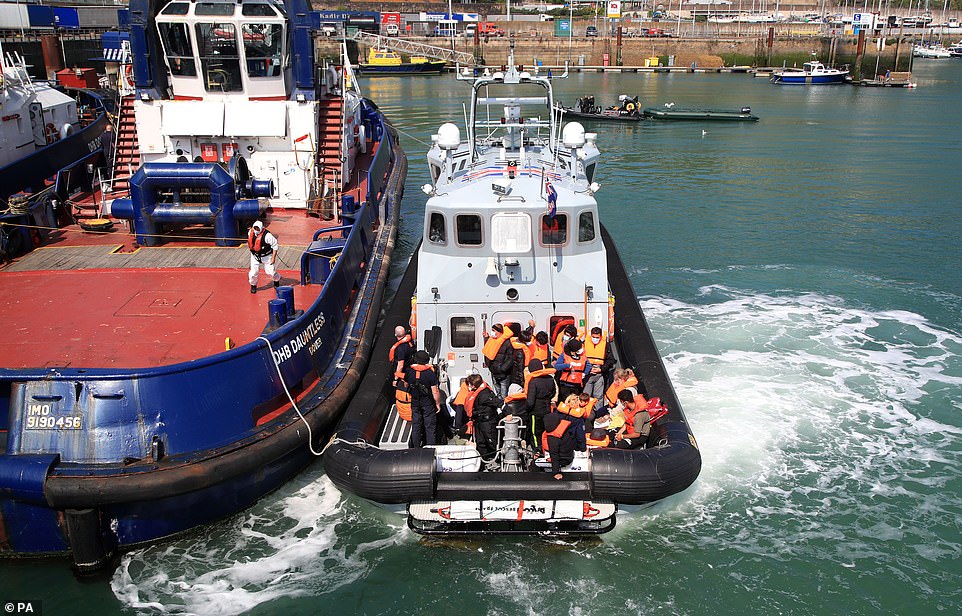 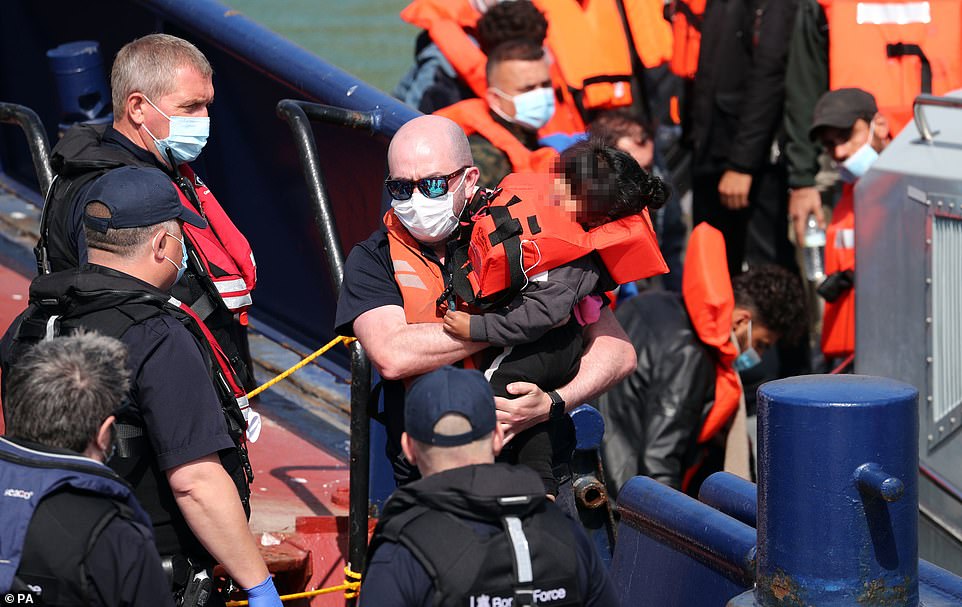 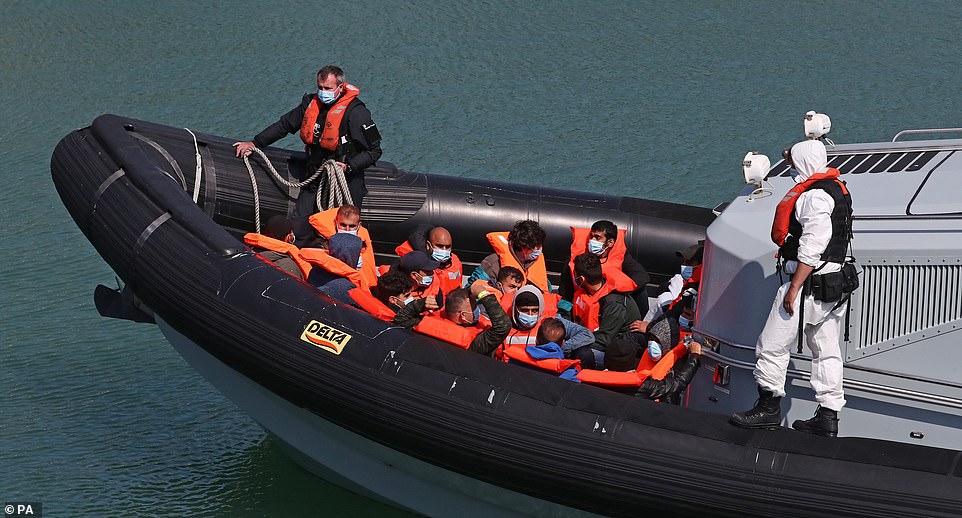 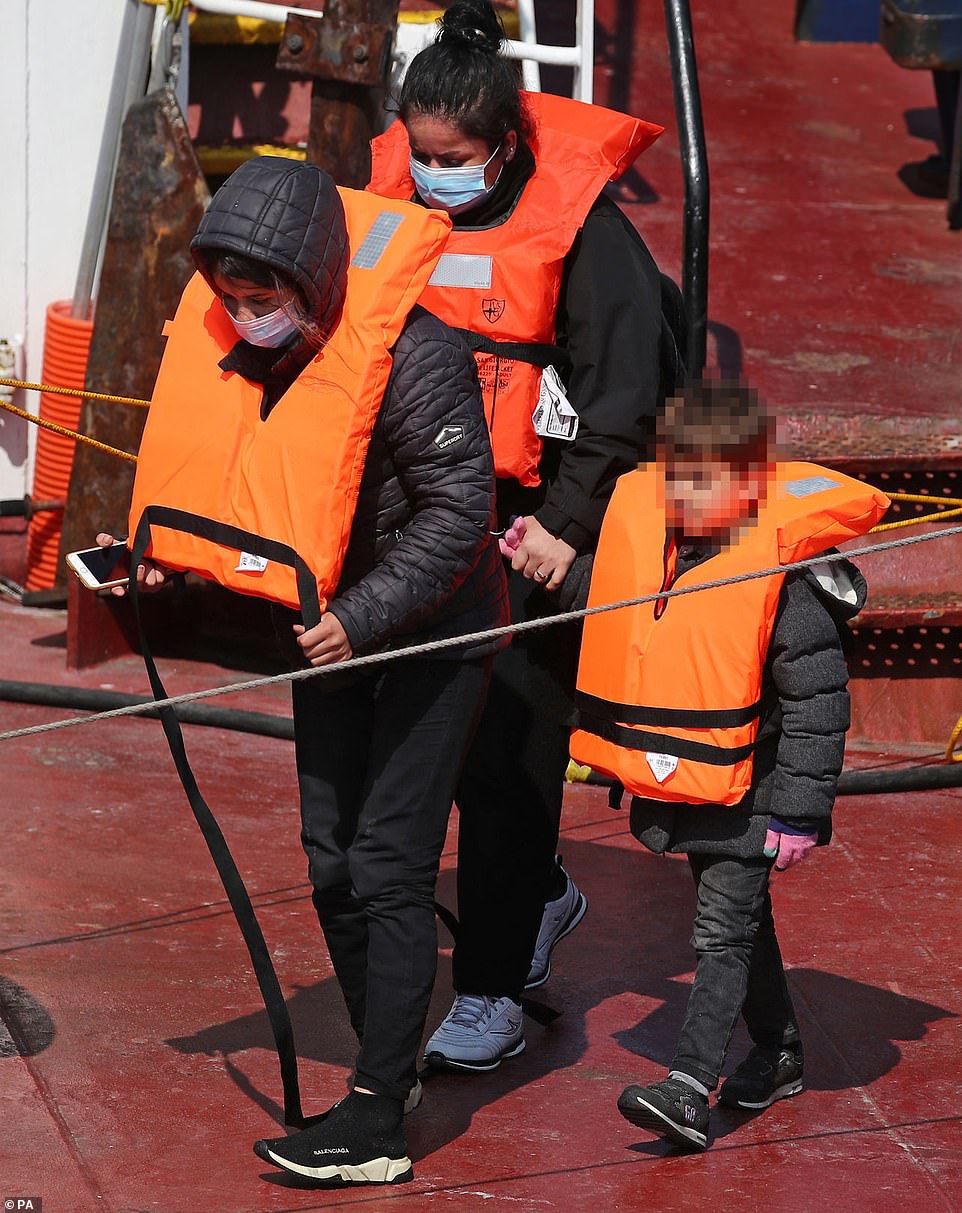 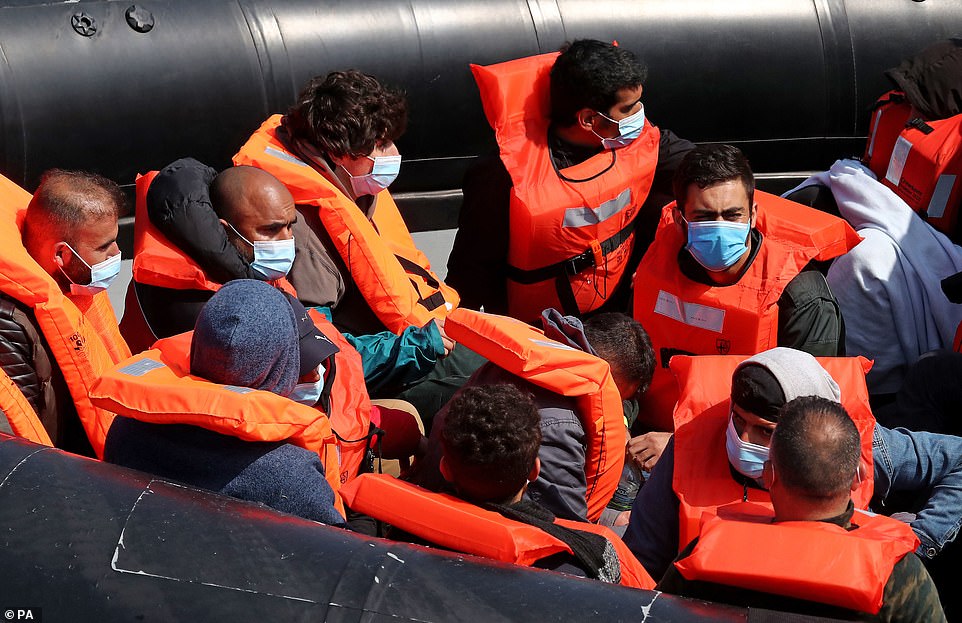 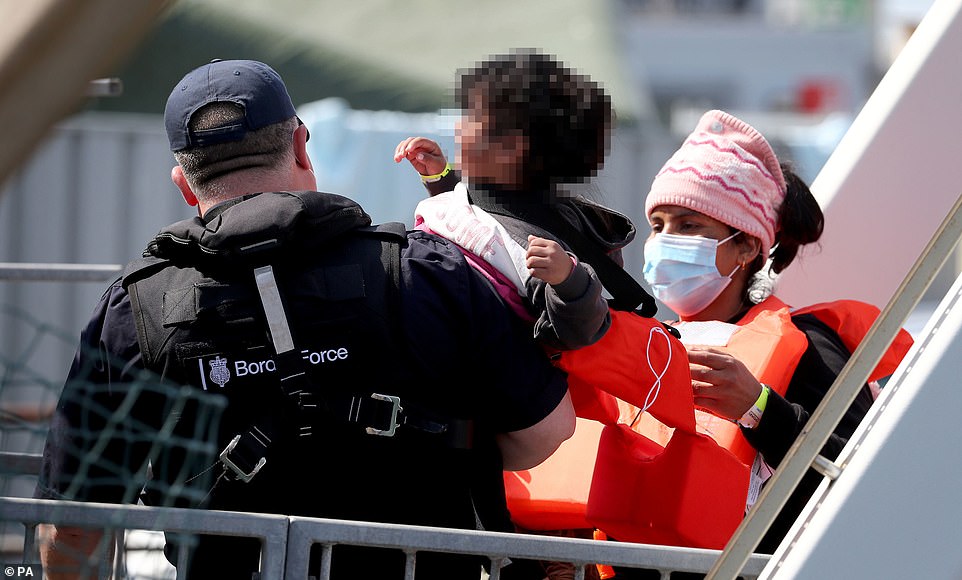 ‘The Government is bringing legislation forward through our New Plan for Immigration which will break the business model of these heinous people smuggling networks and save lives.’

Even more migrants could have crossed over the past few days if they had not been stopped by authorities in France. Last Friday, the French prevented seven crossings involving 165 migrants.

The next day they stopped a further nine crossings concerning another 144, while on bank holiday Monday the French prevented two crossings involving 37 people.

Overnight on Monday and Tuesday, French authorities discovered people near their coast with marine equipment such as boats and engines. They prevented a further six crossing attempts where 20 people were concerned.

On Tuesday, the French intercepted one further crossing, preventing 16 people from reaching Britain.

In 2019. Miss Patel pledged that migrant Channel crossings would be an ‘infrequent phenomenon’ by last spring. But last year’s total was more than four times the number seen in the previous 12 months.

Overall numbers of asylum applications in Britain were down by 24 per cent year-on-year to just under 27,000 in the 12 months to the end of March.

The growth in the number of Channel crossings reflects how migrants are increasingly using the route, compared with other methods such as hiding in lorries.

It comes as six asylum seekers formerly housed at Napier Barracks won a legal challenge today against the Government after a High Court judge found their accommodation failed to meet a minimum standard.

The former Army barracks in Kent have been used to house hundreds of asylum seekers since last September, despite the Home Office being warned by Public Health England (PHE) that it was unsuitable.

The men, all said to be ‘survivors of torture and/or human trafficking’, argued that the Home Office unlawfully accommodated people at the barracks and conditions there posed ‘real and immediate risks to life and of ill-treatment’. 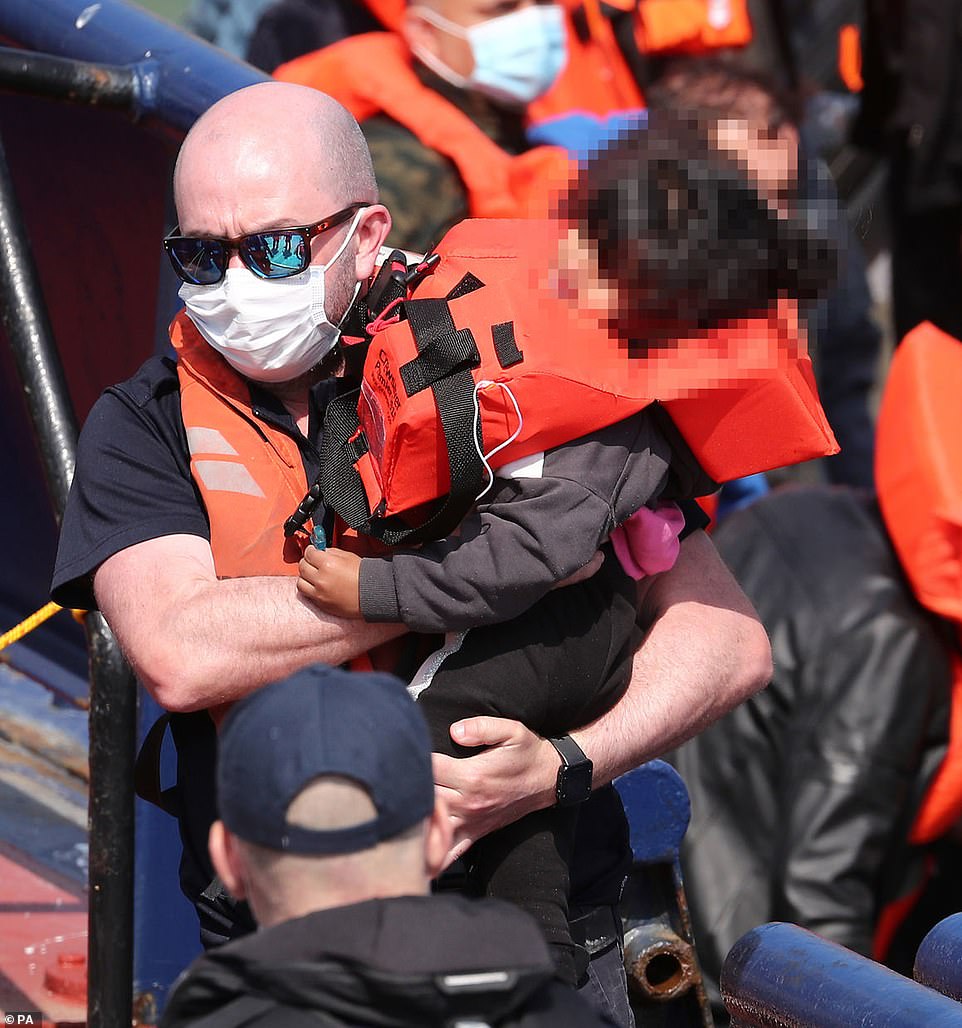 A group of people, including children, are brought into Dover Marina today following a small boat incident in the Channel 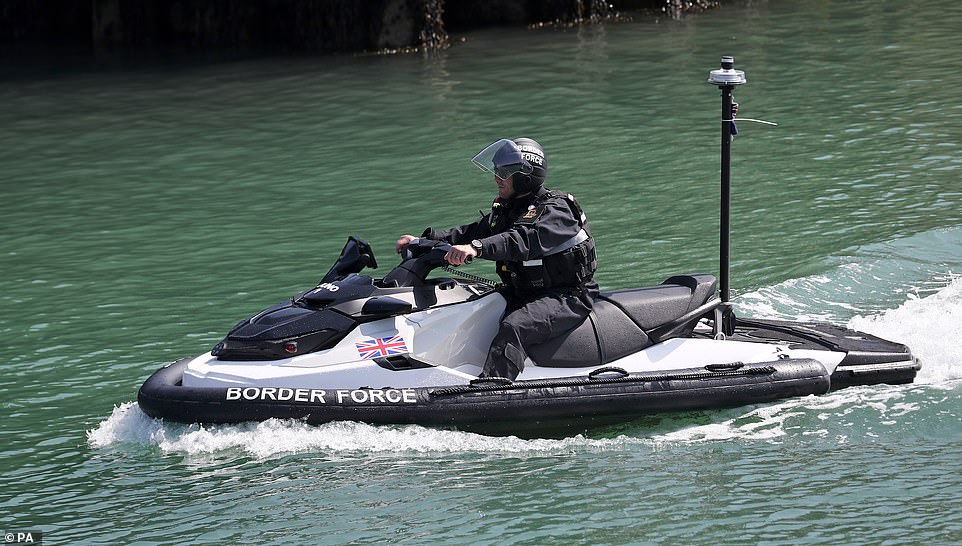 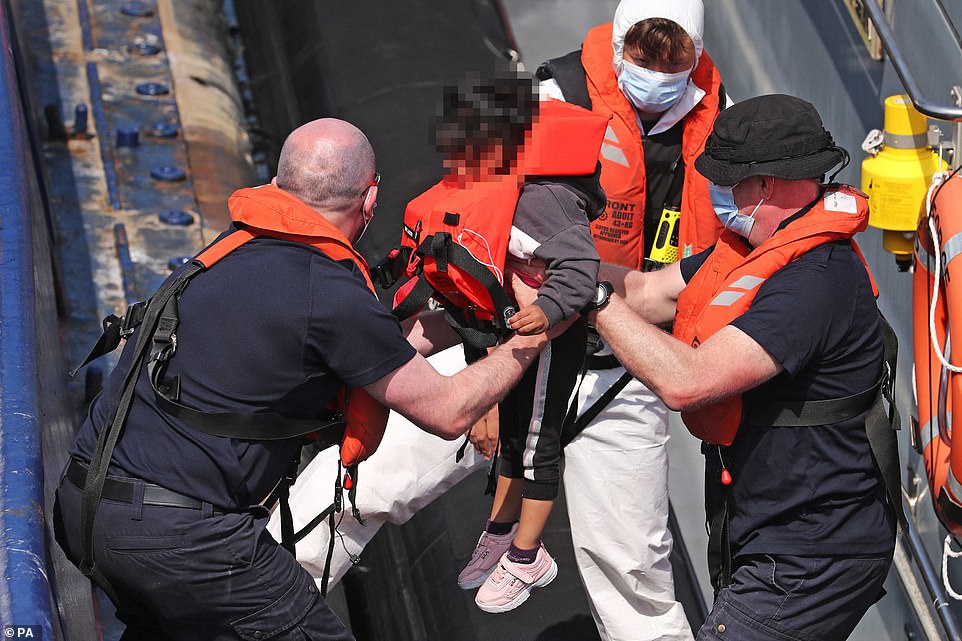 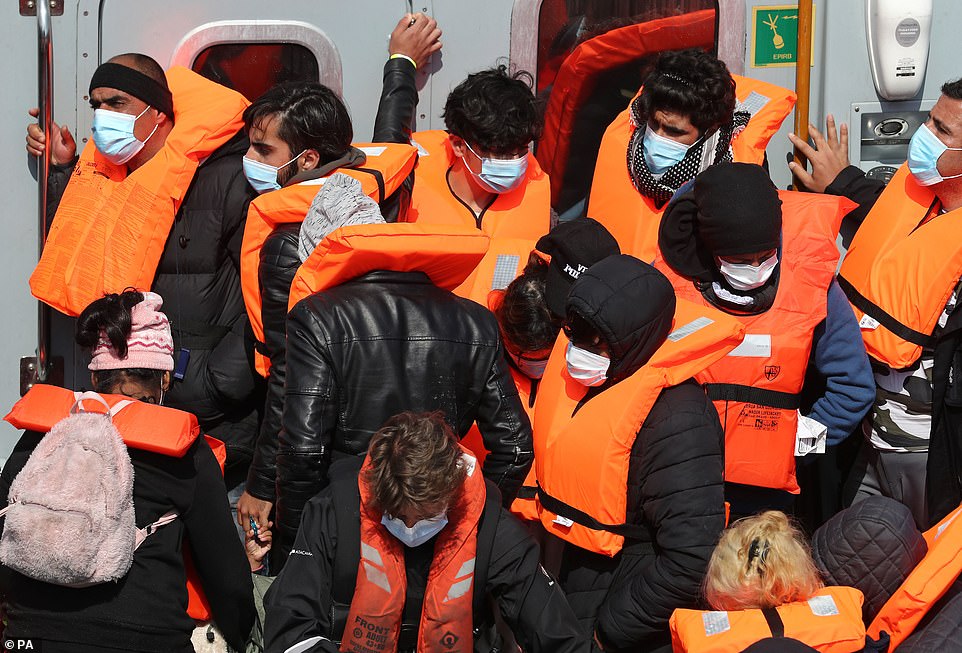 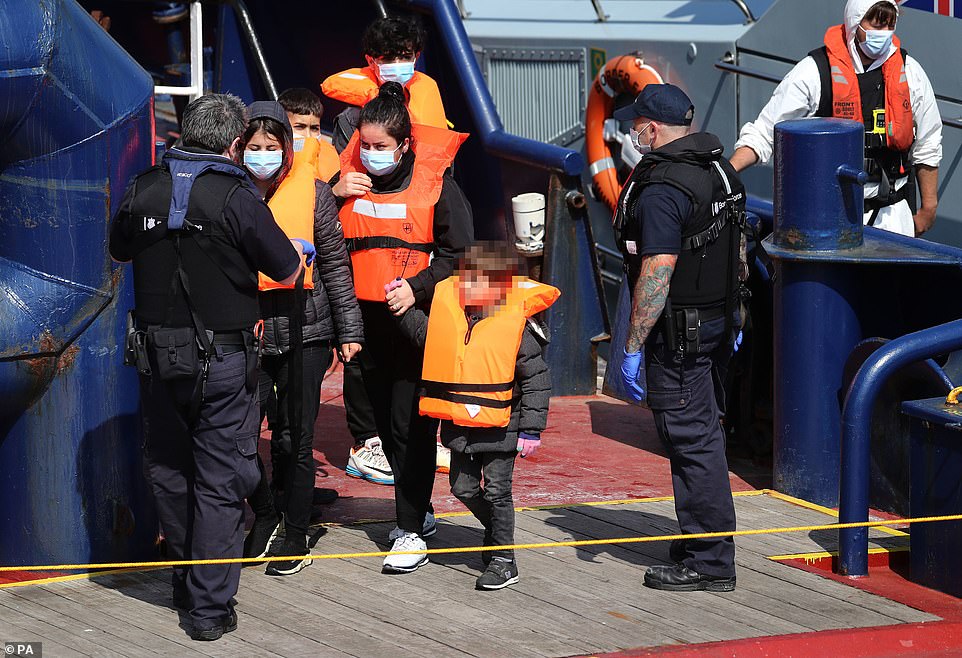 During a two-day hearing in April, the men’s lawyers said accommodating asylum seekers at the ‘squalid’ barracks was a breach of their human rights and could amount to false imprisonment.

This morning, Mr Justice Linden ruled in favour of the men and found that the Home Office acted unlawfully when deciding the former military camp was appropriate.

He said: ‘Whether on the basis of the issues of Covid or fire safety taken in isolation, or looking at the cumulative effect of the decision-making about, and the conditions in, the barracks, I do not accept that the accommodation there ensured a standard of living which was adequate for the health of the claimants.

‘Insofar as the defendant considered that the accommodation was adequate for their needs, that view was irrational.’

The men’s lawyers had argued that moving them to the former Ministry of Defence camp ‘exposed them to an exceptionally high risk’ of contracting Covid-19.

Almost 200 people tested positive for coronavirus during an outbreak at the barracks earlier this year, senior Home Office officials told MPs in February. 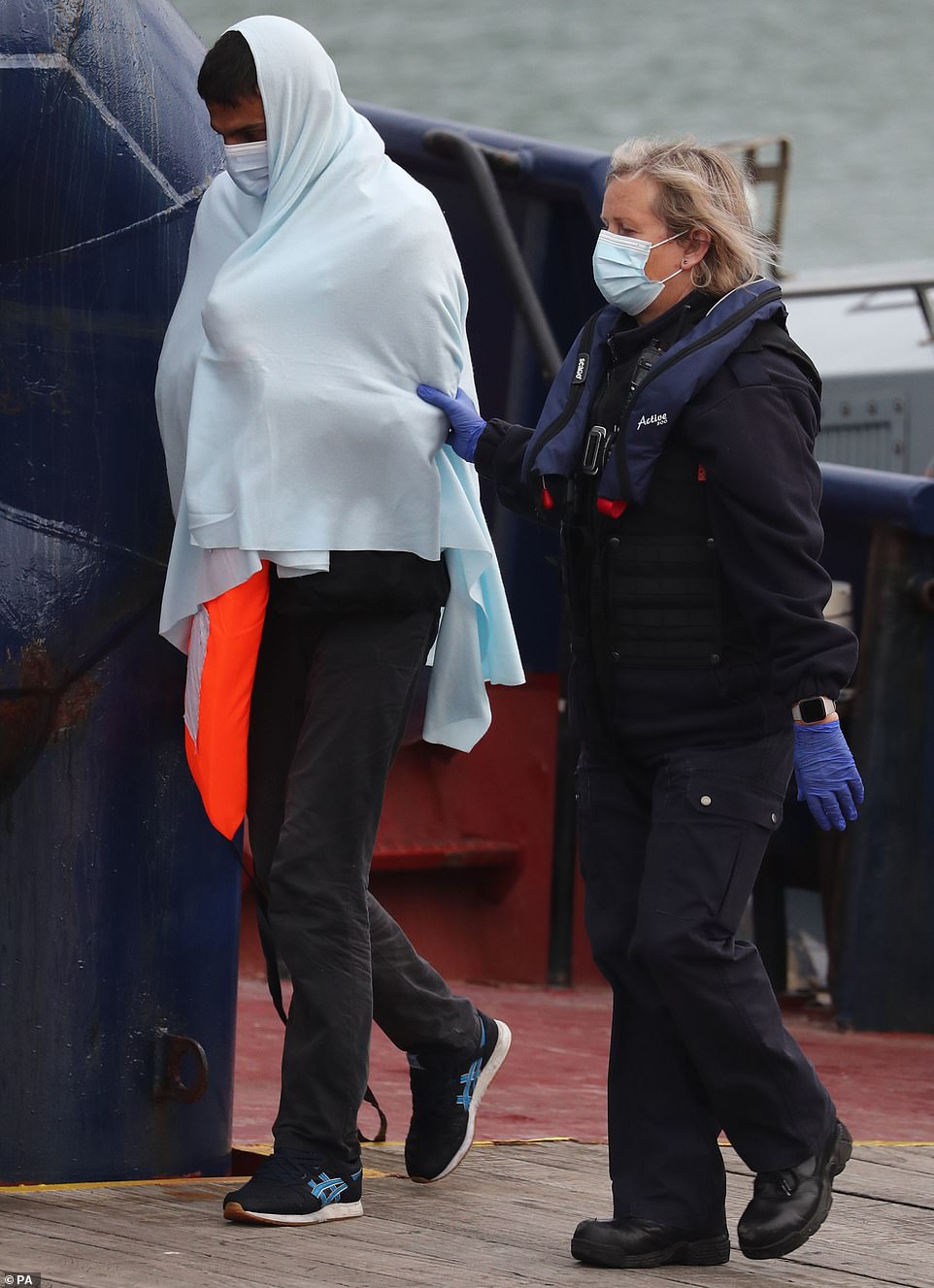 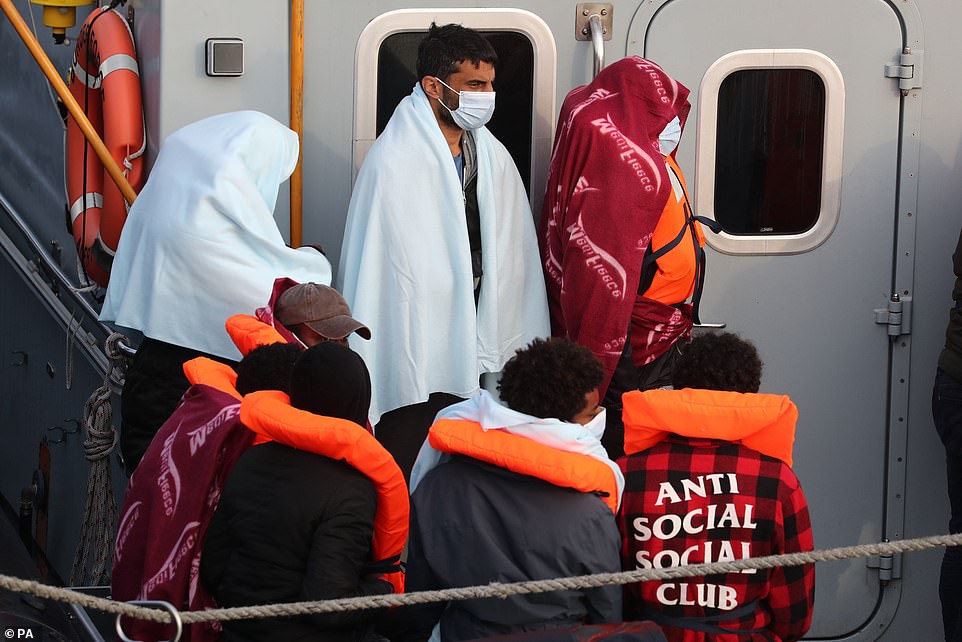 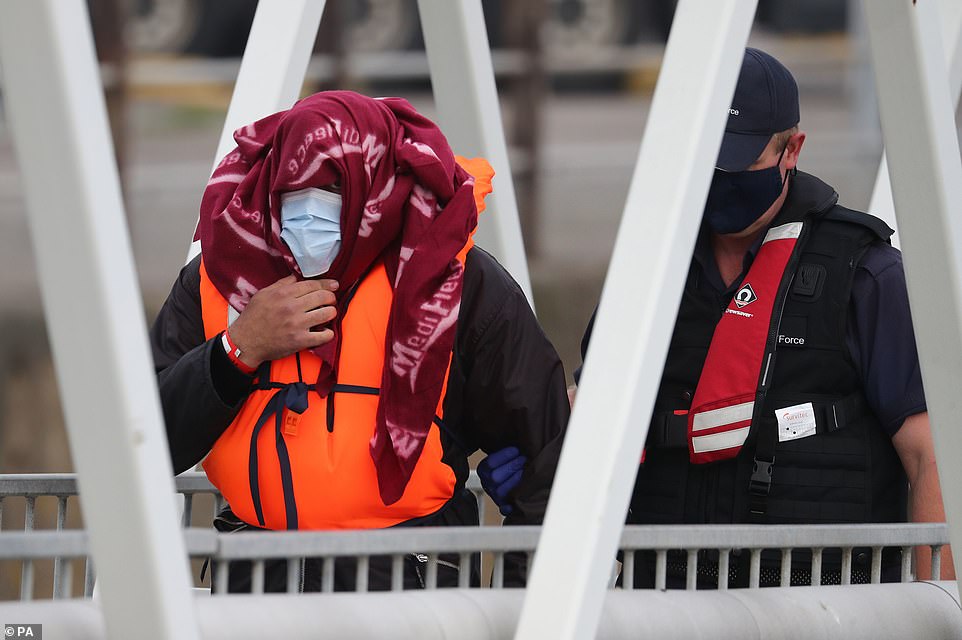 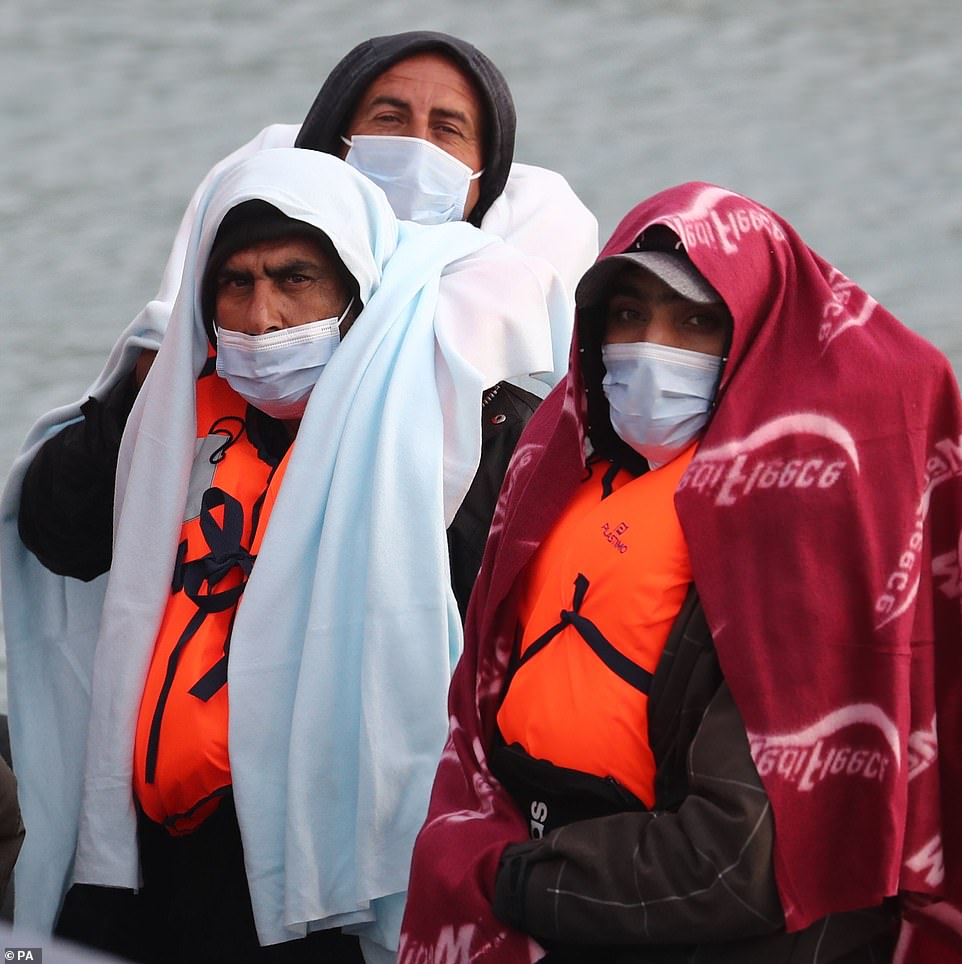 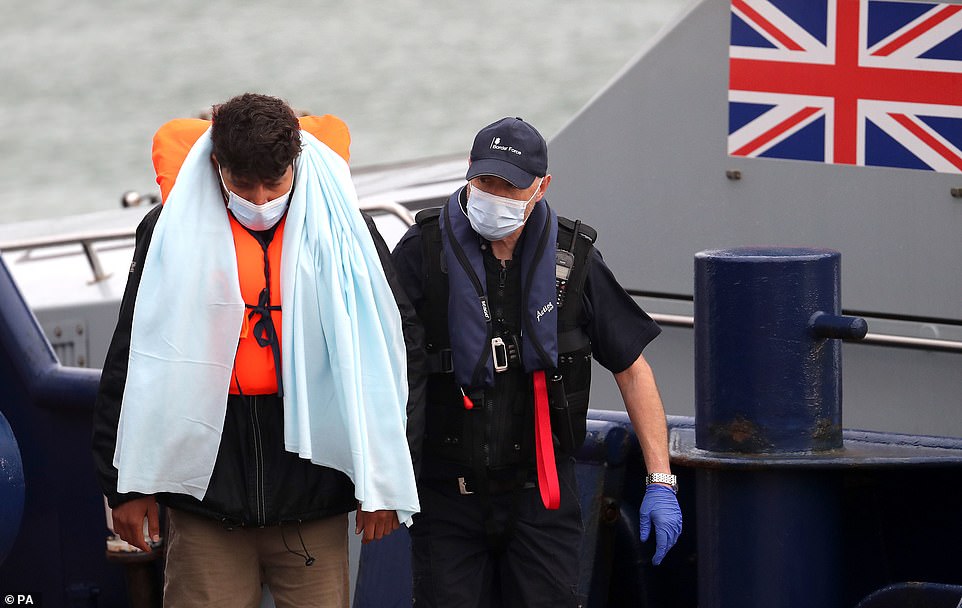 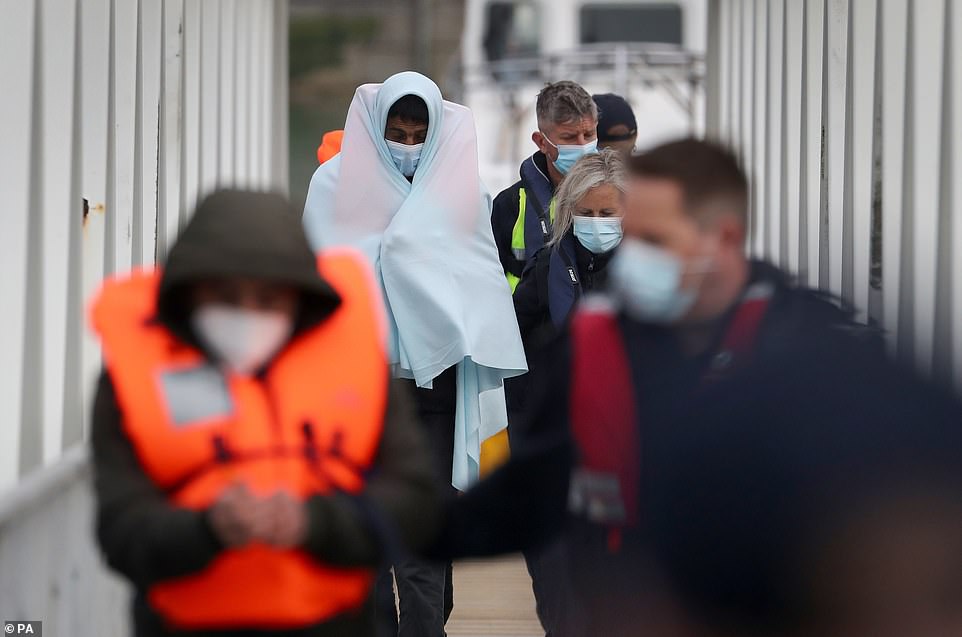 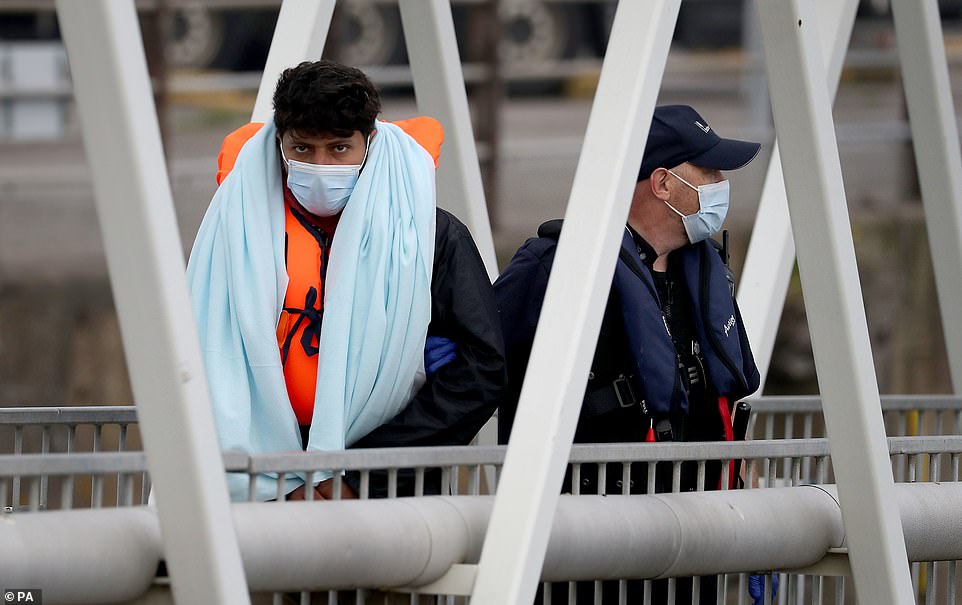 This came after PHE told the Home Office that ‘opening multi-occupancy dormitory-style accommodation at Napier’ was not supported by guidance in September.

Mr Justice Linden referred to overcrowding and the failure to follow PHE advice as among the reasons the barracks were unlawfully unsuitable, finding it was ‘virtually inevitable that large numbers of residents would contract Covid-19’.

He said: ‘The fact that the decision to make use of the barracks entailed failing to apply fundamental aspects of the advice of PHE – not to use dormitory-style accommodation but, if they did, to keep numbers down to six per dormitory which would then form a bubble – meant that the defendant failed to ensure ‘a standard of living adequate for the health of (the claimants)’ whether the point is taken in isolation or cumulatively with the other features of the accommodation at the barracks.

‘It was also irrational, in itself, to depart from the advice of the government body charged with providing advice to the public on Covid safety in such a fundamental way without good reason, and to send the claimants to the barracks when the measures which the defendant herself regarded as appropriate – e.g. transferring asylum seekers from quarantine and in bubbles – were not in place.’ 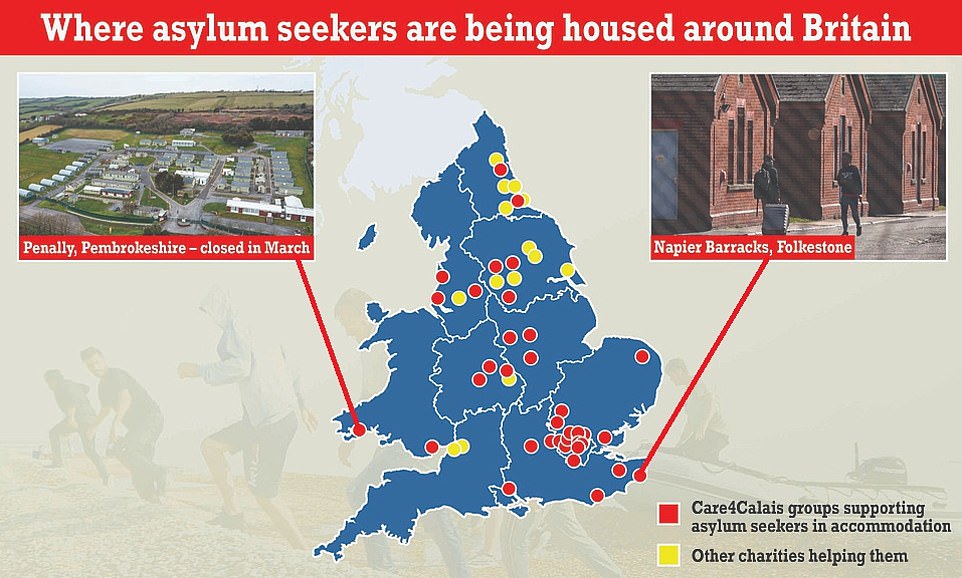 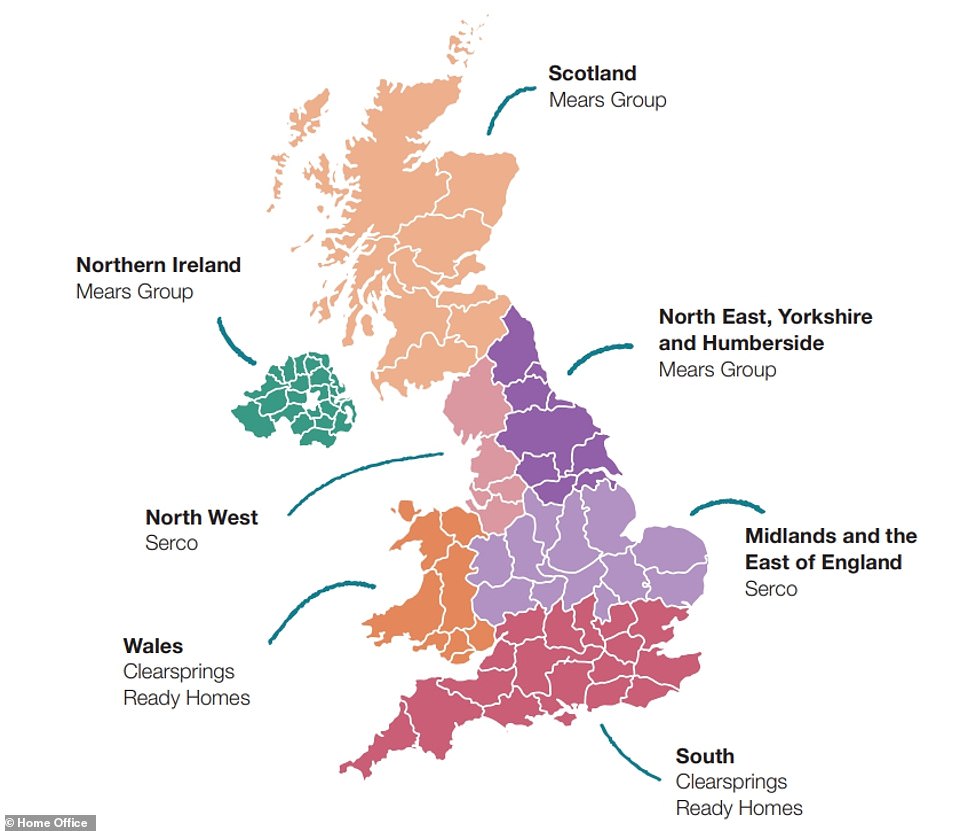 Campaigners including Liberty and the Joint Council for the Welfare of Immigrants, who both intervened in the case, have called for Napier Barracks to be shut down.

The judge declined to rule that the barracks could never be used to house asylum seekers and said his findings were based on the conditions the six men faced.

He added: ‘Even if it were appropriate to adopt a more wide-ranging approach, which I do not accept, the circumstances of the particular asylum seeker are relevant, as I have pointed out, and much depends on the conditions at the time when they are or were there, and for how long they were there.’

Mr Justice Linden’s judgment does not force the barracks to close, and the Home Office is now considering its next steps.

The judge later said: ‘If the barracks are to continue to be used, there clearly need to be substantial improvements in the conditions there, and lower numbers of asylum seekers living there for significantly shorter periods, with measures to reduce the risk of Covid infection which are consistent with PHE advice. 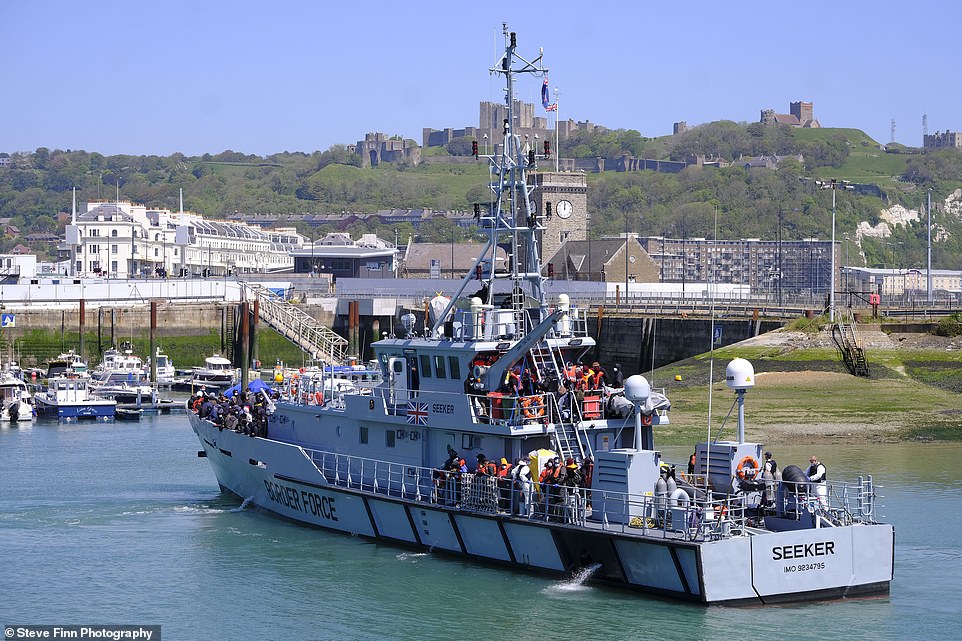 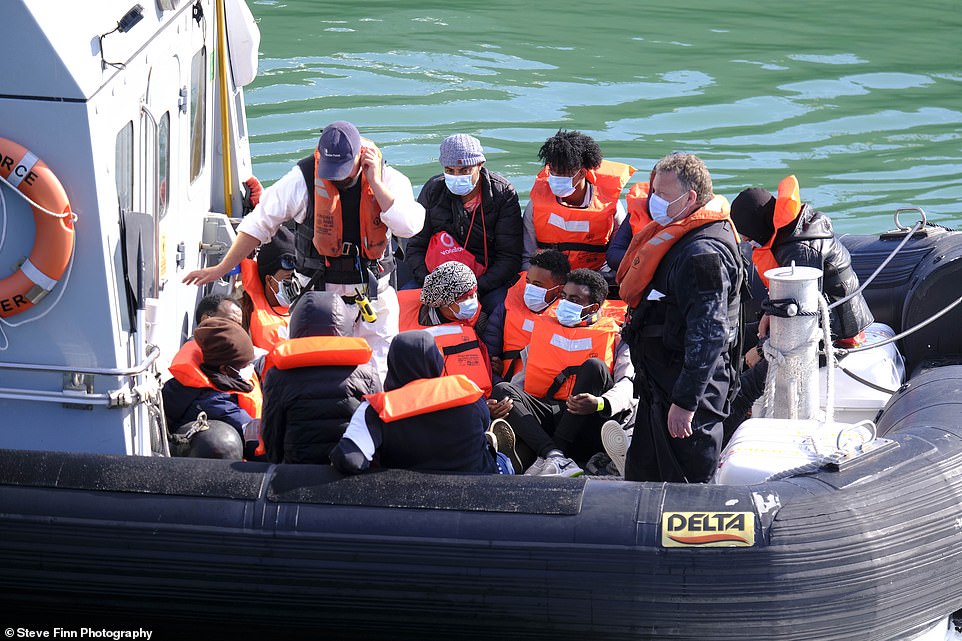 ‘But there also needs to be a better system for identifying those for whom such accommodation is not suitable and for detecting cases where, although suitable when initially transferred, it ceases to be during the course of their stay.’

The Home Office and the six men need to agree on damages and what declarations are required.

A Home Office spokesman said: ‘During the height of the pandemic, to ensure asylum seekers were not left destitute, additional accommodation was required at extremely short notice.

‘It is disappointing that this judgment was reached on the basis of the site prior to the significant improvement works which have taken place in difficult circumstances. Napier will continue to operate and provide safe and secure accommodation. We will carefully consider the ruling and our next steps.’