Inflation dominated talk on trading floors after China made moves to protect its factories from rising costs.

Latest data out of Beijing showed that inflation at its factories had hit the highest level since 2008, driven by price increases for oil, metals and chemicals.

China is one of the world’s biggest exporters and there are fears that inflation could be passed on to ordinary customers through increased prices.

Sparks fly around a worker in a factory in Nantong, in China’s eastern Jiangsu province. Latest data out of Beijing showed that inflation at its factories had hit the highest level since 2008

There are also murmurings that Beijing is looking into controlling the prices of oil, iron ore and other raw materials, should they continue to rise.

One trader said: ‘The inflation situation is serious now. Chinese producers will either have to pass the rising costs onto the consumer or more worrying still the government will step in to control the situation.’

There have also been signs that China’s growth has slowed of late, which in turn hurts London-listed miners who sell into the world’s second largest economy. 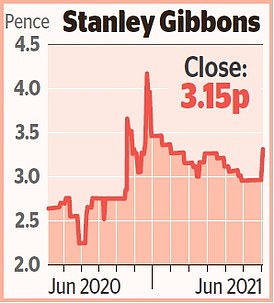 The world’s most famous and valuable stamp has been bought by London dealer Stanley Gibbons for £5.9million.

The rare stamps merchant snapped up the 1856 One-Cent Magenta from British Guiana, which is the only one in existence, at an auction in the US and will display it at its store on the Strand in London.

The company is planning to allow investors to take part in a so-called fractional ownership of the stamp as it moves into digital collecting.

Stanley’s biggest shareholder, Phoenix, provided an interest-free loan to fund the purchase. Shares were up 3.3 per cent, or 0.1p, at 3.15p.

Marks & Spencer was another notable faller – down 3 per cent, or 4.95p, to 159.3p – after an analyst report warned the retailer was still firmly in ‘restructuring mode’.

Marks has struggled during the pandemic and disappointed investors again two weeks ago after posting a £209million loss and vowing to close more stores.

Jie Zhang, analyst at Alphavalue, said: ‘Marks & Spencer has been in restructuring mode for a long time and this will continue until 2023.

‘The attempt to reposition has weighed on the figures more than the worldwide unrest.

‘There is plenty of headroom to catch up but all business fronts are suffocating and need to be upgraded (retail stores and online). This means continuing cash burn.’

There were some positives, especially in the airline sector which has been under pressure ever since the Government removed Portugal from the green list.

The moves higher came after the European Union announced the launch of its EU digital Covid certificate – set to allow freedom of movement around the bloc.

Companies such as Easyjet and Ryanair sell more flights to Europeans than they do to UK nationals and the Wizz Air chief executive said that he now expects to fly more this summer than it did pre-pandemic.

‘We are ramping up. We are seeing a less constrained environment going into peak summer and quite likely we’re going to be above our 2019 capacity in a month or two,’ Jozsef Varadi said.

The deal will see around 800,000 tonnes a year go to Singapore for a decade from 2024. Pavilion is a subsidiary of Singapore’s state investment vehicle, Temasek.

It is the third deal it has signed since November, following similar agreements with Chevron and Qatar Petroleum Trading as Singapore tries to diversify its gas imports.

On the currency markets the pound was down against the dollar at 1.4120 and against the euro at 1.1589 amid post-Brexit trade issues over Northern Ireland, after Britain and the European Union have exchanged threats in a stand-off over the movement of chilled meats from Britain to Northern Ireland.