Shares in Best of the Best tumbled by around 30 per cent after the online competition company said it had seen a decline in customer interest recently, overshadowing its stellar annual results.

Pre-tax profits rose to £14million in the year to the end of April, from £4.2million the year before, after revenues rose to £45.7million, from £17.8million.

In light of the strong performance, the company hiked its final dividend to 5p per share from 3p, with investors also in line for a special dividend of 50p worth a total of £4.71million.

But shares in the AIM listed company tumbled by more than 30 per cent at one point this morning. They were down by 29.8 per cent to £18.45 by market close on Wednesday.

However, they still remain some 60 per cent higher than last year, and have seen their value jump by around 500 per cent over the past two years.

The massive drop comes as the company said it has seen ‘somewhat of a reduction’ in interest from customers since the lifting of lockdown restrictions in April when shops and restaurants reopened.

Chief executive William Hindmarch said: ‘We are closely monitoring this, but with our flexible model, growth strategy and plans for the year ahead, we expect customer engagement to return to normal levels before too long.’

Best of the Best closed its last physical competition site at Birmingham airport in July 2019 after 20 years of leasing physical sites at airports and shopping centres across the country.

These included Heathrow Airport, where its first physical site was located, as well as Gatwick, Edinburgh, Manchester and Dublin airports, and later on, Westfield Shopping Centre in London.

Hindmarch said that with the benefit of hindsight, the online move was ‘opportune’, given the restrictions on travel that have been in place due to the pandemic.

‘Having made the strategic decision to exit our predominantly airport-based retail estate and concentrate on a pure online strategy, we have been able to tailor our business, product and pricing specifically to a much more scalable, online only proposition,’ he added.

BOTB was set up by Hindmarch in 1999 and started to take off thanks to the power of social media.

People taking part in the competition have to place a marker where they think a football was in a photograph before it was cleverly edited out.

Its ‘Dream Car’ competition allows customers to buy tickets from £1.60 to win supercars like Jaguars and Tesla, while tickets for its ‘Midweek Car Competition’ start at just 80p. 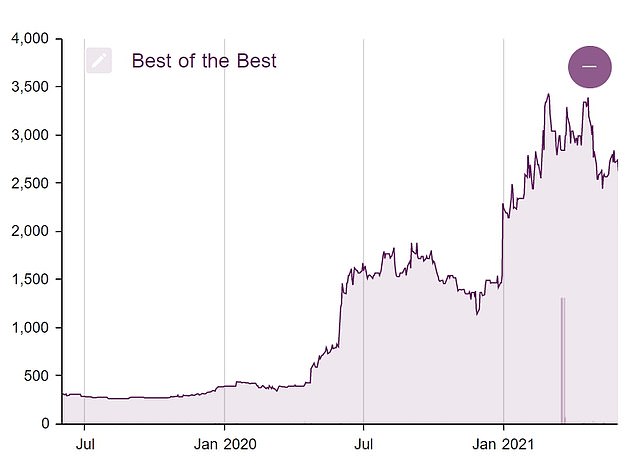 Stellar rise: BOTB shares tumbled today, but they are still about 60% higher than last year and have risen by about 500% over the past two years