Always keep your eye on the ball! Receptionist is smacked in the face by wayward pool shot

This is the moment a receptionist was smacked in the face by a wayward pool shot in China.

The woman was struck when a man tried to break the rack, sending the ball flying off the table.

Footage from Macheng, Hubei province, shows the man lining up and striking the cue ball, hitting it towards the rest of the balls.

The receptionist, meanwhile, can be seen staring at the computer, phone in hand, completely oblivious to the impending danger.

Footage captured the moment a pool cue ball hit a woman between the eyes after ricocheting off a table in Macheng, China 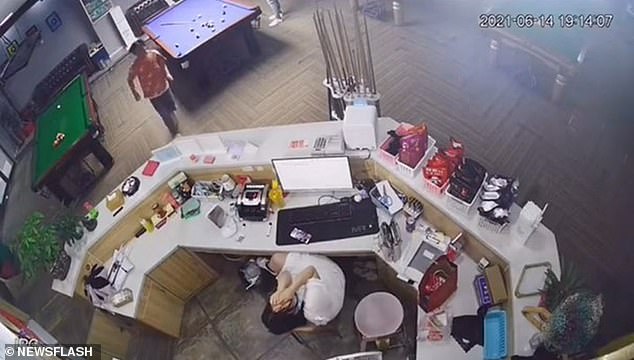 The receptionist was struck in the head when a man broke the rack, sending the ball flying off the table

At the edge of the frame, the man can be seen watching in horror as the ball sailed through the air and smacked the woman in the face.

She then collapsed back in her chair and brought her hands to her face.

The man quickly abandoned his cue and rushed round the table to the motionless woman’s aid as the ball came to rest on her keyboard. 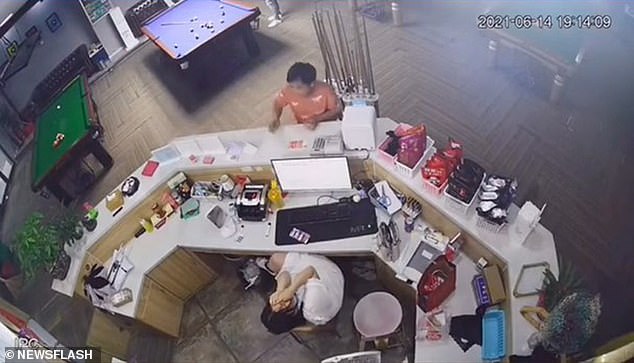 Shop owner Mr Li has confirmed the unnamed woman was not badly injured in the incident and is recovering.

The surprising shot in the Hubei province city of Macheng on June 14 was caught by a surveillance camera in the corner of the room.

Knocking the ball off the table is fairly common in amateur pool games, but it is rare to see a ball fly through the air and hit someone.