To fly over London in an AW149 military helicopter on a clear summer’s morning is to experience a magnificent vision of the capital in its glory.

On a thrilling trip from London’s heliport in Battersea, we zip by Hampton Court and Buckingham Palace, and enjoy a bird’s-eye view of The Shard’s gleaming pinnacle.

In the seat next to me is Nick Whitney, Leonardo Helicopters’ managing director. Far below is the Olympic stadium, where the Queen and James Bond were airlifted into the 2012 opening ceremony in one of his choppers.

Ready for takeoff: A Leonardo AW149 helicopter leaves Battersea Heliport. The AW149 is Leonardo’s contender for the Ministry of Defence’s plan to buy a new medium helicopter

Normally, the AW149 would be stashed with machine guns and rocket launchers, ‘but they won’t let us fly along the Thames with military weaponry,’ Whitney says, looking mildly regretful.

It would also be equipped with a highly sophisticated defensive system to protect the troops on board from being blown to smithereens by anti-aircraft missiles.

Fortunately, that’s not necessary on our jaunt.

After following the snaking route of the river, we head out into the countryside where the pilots demonstrate how manoeuvrable it is, which is vital in a war zone.

The AW149 is Leonardo’s contender for the Ministry of Defence’s (MoD) recently announced plan to buy a new medium helicopter.

Maximum speed is 193 miles an hour and it can carry up to 16 fully equipped personnel.

Considering all that, it is relatively quiet and smooth.

‘We don’t want troops staggering off the helicopter because they have had such a noisy, bumpy ride. They’ve got to be ready for combat,’ says Whitney.

If chosen, the AW149 would replace the Puma and three aircraft, understood to be the Bell 412, the Bell 212 and the Dauphin N3.

The price is confidential and would depend on exactly how it is kitted out. To give some idea, according to aviation sources, the AW189 civilian version costs around £18million to £20million.

At the moment, the AW149 is made in Italy, but if Leonardo wins the contract from the MoD, the helicopters will be manufactured in Yeovil in Somerset, where the company employs around 3,100 people.

Its activities in the area support a total of more than 12,000 UK jobs.

Leonardo owns several former big names in aviation including Marconi Instruments in Luton and Ferranti in Edinburgh, as well as the former Westland helicopters in Yeovil.

Westland’s history dates back to the First World War, when the first aircraft built there in 1916, a torpedo-carrying Short 184 seaplane made of wood, wire and fabric, was towed off the site by horse and cart.

In the Second World War, more than 2,000 Spitfires and Seafires were produced.

The Westland name more recently became synonymous with a huge political row in the mid-1980s when Michael Heseltine, then defence secretary, fell out with Margaret Thatcher.

She wanted the then-struggling company to merge with Sikorsky of the US, while Hezza favoured a European solution.

The Iron Lady prevailed, and subsequently the business passed through the hands of a number of owners including GKN and Finmeccanica of Italy, which changed its name to Leonardo in 2016. 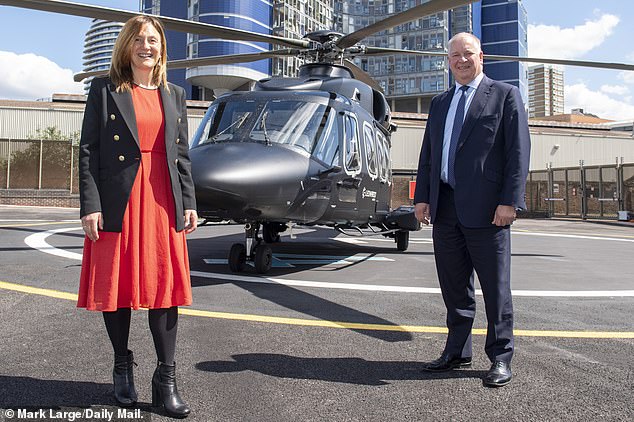 High flyers: The Mail’s Ruth Sunderland with Leonardo’s Nick Whitney. The company is the second largest supplier of defence equipment to the MoD after BAE Systems

Today, Leonardo makes Merlins and Wildcats and is the second largest supplier of defence equipment to the MoD after BAE Systems.

Over the past year, its Merlin and Wildcat helicopters have been helping to fight Covid-19, by transporting key personnel and acting as air ambulances.

The competition is likely to include Sikorsky’s Black Hawk, though industry expert Howard Wheeldon suggests the Airbus H175 and H225M Caracal are the main contenders to compete with AW149.

Leonardo’s chances of winning the contract are ‘good, if the Government has taken on board the message about maintaining sovereign capability’.

‘It is theirs to lose,’ Wheeldon says. He adds that the AW149 would make an ‘excellent’ choice.

Leonardo claims to be the only company that will produce the helicopters in the UK from start to finish.

That is important, because if they are made abroad, it could entail losing vital skills and intellectual property. In turn, that would risk weakening our military capability and our ability to defend the realm.

‘The helicopter sector in the UK is at a crossroads. Currently, we have the capability to do everything here. If we get this order it will sustain that,’ says Whitney.

‘We need to build and maintain capability in the UK, we can’t just buy it in.

‘We are the only company that can make helicopters in the UK all the way from start to finish, from design to delivery.

‘Initially they would come out of Italy because we have a production line working there. But they could be finished in Yeovil, and then later aircraft could be built completely in Yeovil.

‘We can raise the UK content of the helicopter to 65 per cent. But that is not the end of the story.

‘If you operate an aircraft for, say, 25 years, then there is a lot of income from servicing – around 75 per cent of the money you spend will be on support.’

Whitney also argues a contract win for Leonardo will help the economic recovery and the Government’s ‘levelling up’ agenda.

The aerospace industry has been hit hard in the pandemic as commercial flights have been grounded, and desperately needs to bounce back.

‘Every £1 spent on a Leonardo helicopter product in the UK leads to £2.40 flowing back in the economy, through our employees, through the supply base we activate,’ he says.

‘“Levelling up” is not just about the North, it is places like Yeovil too. We are the pre-eminent employer here and if you take us out of the equation the average salary would fall quite far.

‘The South West has been badly affected by the pandemic because it is dependent on tourism.

‘We recruit 160 apprentices and graduates every year. This year, 53 per cent of applicants were female, which is fantastic for getting more women into engineering.

‘I started out as an apprentice myself. I desperately want to make sure we have capacity to bring more youngsters in.’

Post-Brexit, he believes that the defence sector has the potential to become stronger.

‘One of the things the UK has going for it is that we are right at the front of this industry.

‘We need the skills and engineers in the UK, and Brexit has heightened awareness of that.

‘Ten years ago engineering was not seen as a career to encourage your children to go into. I find that really shocking.

‘But the Government has finally woken up to the fact that we need to build and manufacture to grow our way back to prosperity, and engineering is the basis of that.’

The MoD may sign up for between 30 and 40 helicopters. The hope is that will be a catalyst for export orders.

‘Many overseas customers look to the MoD,’ says Whitney. ‘We conservatively estimate there would then be 500-550 aircraft that could then be sold over a ten-year period.

‘Boris Johnson said: “Build back better.” I say: “Build helicopters and build them in the UK.”’