By Jane Denton For Thisismoney

Trade-focused timber supplier and distributor James Latham has seen its profits rise as a squeeze on construction supplies in the past year pushed prices up.

AIM-listed and UK-based, it has seen its share price rise sharply today and is currently up nearly 8 per cent to 1,176.00p.

The group, which was founded in 1757, provides everything from wood-based panel products like plywood to MDF mouldings such as skirting boards.

Building frenzy: Trade-focused timber supplier and distributor James Latham has seen its profits rise in the past year

The group’s comments on prices are pretty striking.

It said: ‘The cost price of our products has started to rise significantly in the second half of the year and are on average 7.3 per cent higher than at the start of the financial year.’

In a boost for shareholders, the group’s top brass have declared a final dividend of 15.5p a share, up from 10p a share.  Shareholders will receive their dividend payout on 27 August.

The company said strong demand for the products it supplies had continued at pace into its new financial year, with margins on the up as well.

It added: ‘Global demand for timber products is very strong, being driven primarily by North America, but also from the construction sector worldwide.

‘Many manufacturers have introduced an allocation system limiting the ability for us to grow our volumes.

‘These manufacturers are unable to significantly increase capacity as they struggle with Covid-19 (especially in South America), labour shortages, rising costs and a shortage of raw materials. 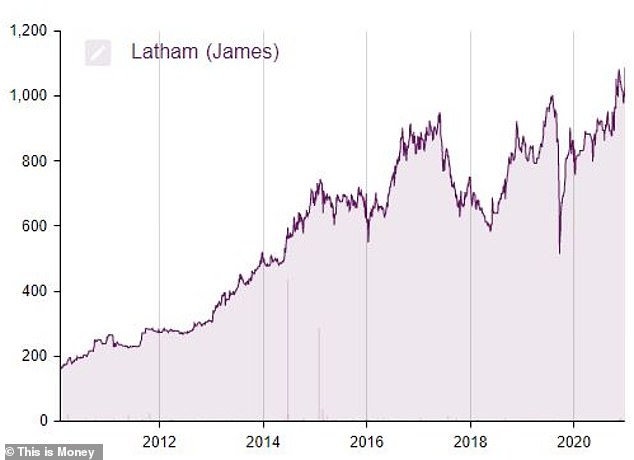 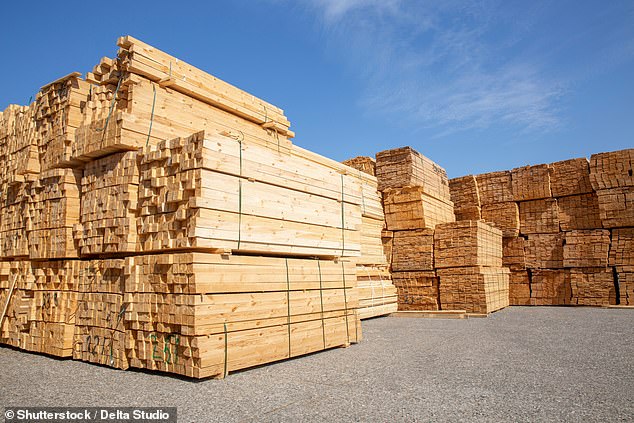 On the up: Shares in AIM-listed James Latham have jumped nearly 8% in a day

‘We have seen significant price rises on many commodity products. This is an area where our volumes have grown as we have been able to use our supplier relationships to secure supply of product for our customers in these exceptional market conditions.

‘There have also been worldwide issues on shortages of shipping containers, in part due to the pandemic, with increased container rates which has further increased the costs of many of our imported products, as well as creating severe delays to shipments.’

Looking ahead, James Latham said its outlook was difficult to predict, but noted that the current supply situation looked set to continue for the rest of the year.

It added: ‘Visibility beyond that is much more uncertain, but we know that the market will change at some point.’

James Latham’s share price is now nearly 40 per cent higher than it was a year ago, when it stood at 845.00p.

During the pandemic, lumber prices rose sharply amid global shortages, sending construction costs through the roof.

Housebuilders and DIY chains were left battling for supplies while demand continued to soar. In May, lumber prices spiked at around $1,607.50, but have seen slipped to around the $867 mark.

‘As the economy has opened back up, people are doing less around their homes’, Chris McIver, senior vice-president West Fraser, the world’s biggest lumber producer, told the Financial Times.

He added: ‘That was enough to drive prices in the other direction which were too high and unsustainable.’

But, a sizeable chunk of lumber brokers think prices will rise at the years roll on, amid cheap mortgage deals and global mass housebuilding projects.