By Rachael Bunyan For Mailonline and Afp

A rogue elephant has killed at least 16 villagers in the past two months after likely being expelled from his herd for ‘bad behaviour or sexual rivalry with other males’, a wildlife official said on Thursday.

The mature male, believed to be 15 or 16 years old, has been on the rampage in the tribal Santhal Pargana region of Jharkhand state ever since he was separated from the herd of 22 elephants.

‘It’s likely he was in heat and was expelled because of his bad behaviour or sexual rivalry with other males,’ Satish Chandra Rai, regional divisional forest officer, told AFP.

‘We are studying his behaviour and a team of 20 officials is constantly trying to track him because our first priority is to protect the animal.’

A rogue elephant has killed at least 16 villagers in the past two months after likely being expelled from his herd for ‘bad behaviour or sexual rivalry’, a wildlife official said on Thursday (file image)

The elephant, which is now on its way back seeking to reunite with the herd, has managed to outwit officials with his sheer speed and unpredictability.

On Tuesday, the elephant lifted an elderly couple with his trunk and battered them to death when they had ventured out before dawn.

Rai said the elephant was only killing people who accidentally got in its way, got too close, or who tried to provoke it and take pictures.

‘He has not been breaking into houses or deliberately attacking people,’ Rai said. ‘We want to see if he is accepted back in the herd. If he is not it will be proved he is a bad boy.’

In recent years there have been rising incidents of elephants killed by locals – and vice-versa – as humans encroach further into forest areas.

In November 2019, an elephant that went on a rampage and killed five Indian villagers was caught after a massive operation to hunt down the animal. 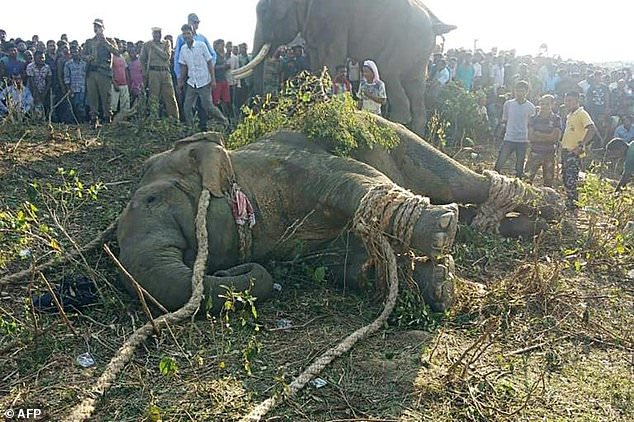 In November 2019, an elephant that went on a rampage and killed five Indian villagers was caught after a massive operation to hunt down the animal 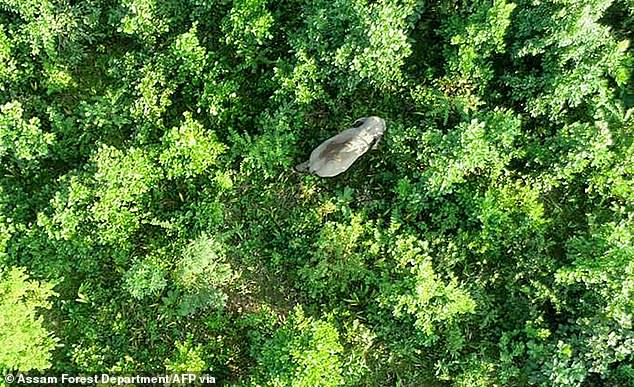 The elephant – named after Osama bin Laden – killed five villagers in a 24-hour rampage in 2019. He can be seen walking through the forest in a picture taken by a drone before his capture

Wildlife officers tracked the pachyderm – dubbed ‘Laden’ after the late Al-Qaeda terrorist leader Osama Bin Laden by the locals it menaced in northeastern Assam state – through a forest for several days using drones and domesticated elephants.

The rogue animal killed five people, including three women, during a 24-hour rampage through Goalpara district in October 2019.

Officials said they would take the elephant’s welfare into account as well as the safety of people living nearby in deciding where it would be relocated.