The 81-year-old cleric’s Twitter feed published a video it said showed him ‘receiving the first dose of the #IranianCovidVaccine that has been developed by young Iranian scientists’.

The footage shows him wearing a surgical mask and a black turban, sitting under a picture of the Islamic republic’s founder Ayatollah Rouhollah Khomeini, as two male medics tend to him, injecting him in the left arm.

Iran announced last week on June 14 that it had had given emergency approval for the domestically produced vaccine.

Iran has not published data about efficacy of the vaccine, but claims that people who get the home made jab have about 85 per cent immunity to the deadly virus.

The Islamic republic is attempting to make up for a lack of vaccines and providing second jabs to those who have already received a first, on a voluntary basis.

Strangled by US sanctions that have made it difficult to make money transfers to foreign firms, Tehran says it is struggling to import vaccines for its 83 million population. 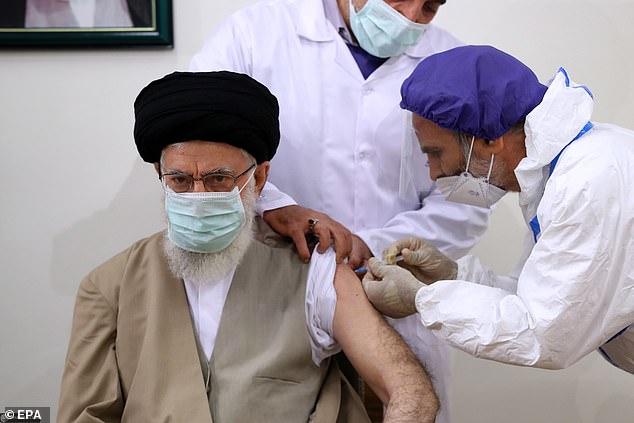 In early January, Khamenei banned imports of UK- and US-produced vaccines, saying they could ‘contaminate’ the country.

In another tweet on his English-language Twitter feed on Friday, he said he was ‘truly grateful to all those who used their knowledge & experience & made scientific & practical efforts to provide the country with such a great, prestigious capability’.

Iran has been devastated by the coronavirus pandemic, which has killed more than 83,500 people among 3.1 million infected, according to official figures widely seen as understating the toll.

Iranian officials said the death toll from Covid-19 rose by 115 over the day into Friday, putting the country’s total at 83,588 since the pandemic broke out last year. 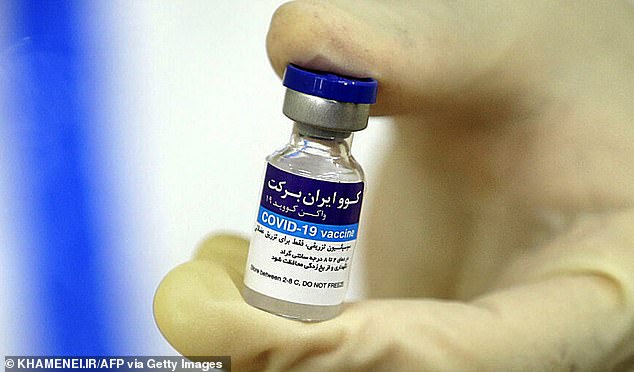 At least 1,397 people remained hospitalized with the virus, she added.

Lari said that 3,219 of the patients are in serious condition, and that 2,809,595 have recovered so far. Iran remains among the hardest-hit countries in the world.

Iran has also said it is working on a vaccine with cooperation from a foreign country. Iranian authorities said that another vaccine, produced jointly by Iran and Cuba, will join the country’s vaccine package in coming days.

Iran retains some access to vaccines, including through its participation in COVAX, an international initiative designed to distribute vaccines to countries regardless of their wealth.

But international banks and financial institutions are reluctant to deal with Iran for fear of American penalties. Under COVAX rules, Iran could order enough doses to vaccinate half of its 82 million people.

The health ministry says more than 4.4 million of Iran’s 83 million people have received a first vaccine dose since an inoculation campaign began in February.

Just over a quarter of those – nearly 1.13 million – have received the two jabs necessary for the vaccine to be fully effective.

Iran is running clinical trials on four other vaccines against Covid-19.