Takeover talk continues to grip the stock market – and all eyes will be on serviced office company IWG when trading resumes today.

Reports last night suggested the firm, which owns Regus and is valued at £3billion, is a potential target.

New York based private equity firm CC Capital has held talks with the London-listed group about a possible £4billion bid in the past month, according to Sky News.illio

That would value the 28.5 per cent stake held by founder and chief executive Mark Dixon at more than £1billion.

The speculation came after the market closed yesterday, with IWG shares down 2.3 per cent, or 7.2p, at 300.2p. But it could be a different story when trading resumes this morning. IWG is just the latest firm to be targeted with private equity also circling Morrisons (up 0.8 per cent, or 1.8p, to 234.5p).

Ultra Electronics has also been in the spotlight. Its shares rose 7 per cent on Friday after private equity-owned Cobham said it was interested in a deal.

But they slammed into reverse yesterday as investors digested a strongly-worded rebuttal from Ultra that seemingly poured cold water on the approach. 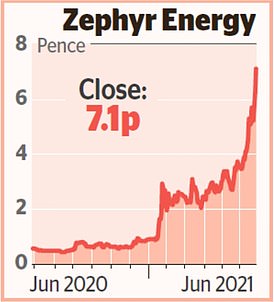 Oil and gas tiddler Zephyr Energy started the week on a high after it brought in a US-based company called Cyclone Drilling to work on a new exploration well.

The two firms have worked together before and Cyclone will use the same rig it used to drill another of Zephyr’s sites.

Boss Colin Harrington said the rig was ‘well known to our drilling team’ and was already in Utah, meaning it would save cash on transport expenses.

Cobham – bought by Advent International for £4billion last year – had said it could buy Ultra, or even that, effectively, Ultra could buy Cobham.

It indicated the two were already in talks – though it was somewhat vague about the details.

But Ultra had a different narrative. It insisted that it had only been in discussions to buy CAES, a division of Cobham, and that it had decided to walk away from that proposition. Ultra shares fell 3 per cent, or 68p, to 2232p.

Both were weighed down by travel stocks again – as Spain, Malta and Portugal all introduced measures to restrict UK travellers who have not had both jabs. And Hong Kong said it would ban all passenger flights from the UK from Thursday.

Closer to home, City Pub Group said it was ‘encouraged’ by bumper sales after it reopened 42 of its sites after the third lockdown. T

AIM-listed Hurricane Energy, however, shot up 29.3 per cent, or 0.64p, to 2.8p after a court rejected a debt restructuring proposal that would have virtually wiped out its shareholders.

Investors had been in uproar about the plans, which would have handed control of the company to Hurricane’s bondholders in exchange for forgiving debt and extending the repayment date on more. A judge said there was no urgency for Hurricane to restructure the debt now.

And speaking of Glencore, mining minnow Ferro-Alloy Resources rose 8.5 per cent, or 2.75p, to 35.25p after chairman Sir Mick Davis – former boss of Xstrata, which merged with Glencore in May 2013 – pumped another £5million into the company earlier than expected.