Traders took his comments as a sign that life would soon be getting back to normal, as a string of pandemic-battered stocks saw their share prices pop.

Revolution Bars climbed 5.2 per cent, or 1.1p, to 22.2p, saying demand had been strong since restrictions began to lift in April.

Revenue will now be ahead of expectations, the firm said, as it spoke excitedly of pent-up demand.

Bingo hall and casino owner Rank Group painted a similar picture, as it said venues across the Grosvenor, Mecca and Enracha brands were now trading above breakeven. Shares added 5.5 per cent, or 9.2p, to 177p.

Cineworld jumped 6.3 per cent, or 4.88p, to 82.32p, amid hopes that film fans would soon be swapping their TVs for the big screen. 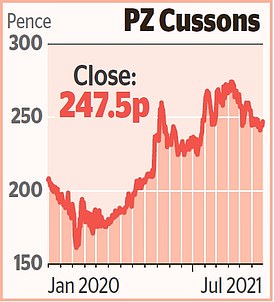 Carex soap business PZ Cussons has revealed steady growth in sales across its hygiene, baby and beauty brands throughout the 12 months to May 31, ahead of reporting its full-year results.

Revenues grew 7 per cent across all regions and there were signs that customers were looking to snap up beauty products to show off as lockdown restrictions eased.

But growth was held back in recent months in its hygiene division as the company faced tough comparisons with when the pandemic first hit and customers stockpiled products.

Even airline, travel and transport stocks were on the rise, as Johnson said vaccines would ‘enable people to travel’.

The optimism was reflected around the world as oil prices topped $75 a barrel.

Brent crude lifted 1 per cent to $75.87, amid signs that demand for fuels could come surging back.

This was despite a dire day for Micro Focus, which tumbled 14.8 per cent, or 80.9p, to 466.1p. The software company, which helps businesses improve their IT systems, shrank its first-half losses from £658.6million to £112.4million.

But Micro Focus said it would have to set aside £51million to resolve a patent dispute with US firm Wapp Tech.

The company, which has struggled following a disastrous acquisition of a Hewlett Packard business in 2017.

Micro Focus has now moved over to one single IT platform following the Hewlett Packard integration but will still incur duplicate costs until the system was fully operational, the firm said, further weighing on performance.

The firm, which provides programmes for engineering companies, said revenues had grown by 10 per cent over the first two months of its financial year, and set financial targets which went down well with investors.

ITV edged up 2.7 per cent, or 3.4p, to 128.95p, as shareholders considered a suggestion from the Government that it could buy Channel 4.

Ministers have launched a consultation into the privatisation of Channel 4 amid concerns over its ability to compete with streaming giants, such as Netflix and Amazon Prime.

Tory MP Julian Knight, chairman of the Digital, Culture, Media and Sport Committee, suggested options could include a merger with ITV or BBC Worldwide, the commercial arm of the BBC.

Media and data minister John Whittingdale said the Government ‘maintains a completely open mind’ about the future of the broadcaster but did note his party colleague had raised a ‘number of interesting possibilities’.

SSE was also on the rise, as it proposed spending £4.1billion over five years on expanding its energy network to help meet demand for renewable electricity.

The company hopes its efforts will support people and companies to buy 1.3m electric vehicles and install 800,000 heat pumps to keep their homes warm. Shares climbed 0.7 per cent, or 10p, to 1510.5p.