A Russian food firm has sparked fury after deleting an advert featuring a lesbian family and then apologising for their ‘mistake.’

The advert was run on its website and showed four women sitting together at the dining table with the slogan: ‘Recipes for family happiness.’

But VkusVill’s marketing strategy backfired spectacularly when it removed the image and posted an apology for offending its customers and clients.

It said on Instagram: ‘There was an article here that hurt the feelings of many of our customers, staff, partners and suppliers. We regret that this has happened, and we consider this publication to be our mistake, a manifestation of the unprofessionalism of certain employees.’

VkusVill’s U-turn sparked fury online, with many saying they had thrown the women – who are a real lesbian family and not actors – under the bus

They replaced the family group – mother Yuma, daughters Mila and Alina, and Alina’s girlfriend Ksyusha – with one of a conventional family under the same slogan.

VkusVill’s U-turn sparked fury online, with many saying they had thrown the women – who are a real lesbian family and not actors – under the bus.

Journalist Slava Malamud tweeted: ‘An absolutely heartbreaking story out of Russia today. A few days ago, a popular supermarket chain, @we_are_vkusvill , published an advertising article featuring a same-sex family. Despite horrific homophobia in Russia, these people agreed to have their real names used.

‘For a short period of time, @we_are_vkusvill were the toast of Russia’s progressives. Two days later, they took the article down and replaced it with an apology. The apology was addressed to the customers, business partners and suppliers …

‘They didn’t apologize to the family, who now face very real death threats. They’ve apologized to bigots for offending their feelings by recognizing that gay families exist and are human.’

In its original post of the advert on June 30, VkusVill had written the caption: ‘We think it would be hypocritical not to talk about the real families among our shoppers. We advise you to weigh up all the pros and cons, before reading this article.’

It was posted at the end of gay pride month.

Simonyan said: ‘[VkusVill] lost the audience of traditionalists like me and now they have severely disappointed the audience they flirted with. Bring them new marketing specialists or something.’ 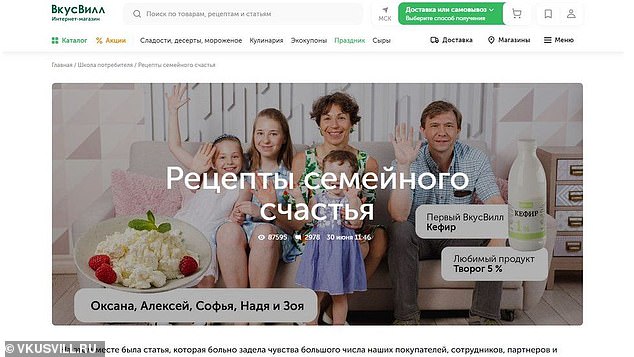 State-backed homophobia is rife in Russia where many of Vladimir Putin’s supporters and his allies in the Orthodox Church take a firm stand against gay rights.

Putin has previously described it as his ‘duty’ to prevent gay marriage to ‘reinforce families.’

In April, he said Russia would not legalise gay marriage as long as he was in the Kremlin.

Homosexuality in Russia – where the influence of the socially conservative Orthodox Church has grown in recent years – was a criminal offence until 1993, and classed as a mental illness until 1999.

Under Russian law, only heterosexual couples can adopt children in Russia.