The United Arab Emirates is creating its own rain using drones that fly into clouds and unleash electrical charges to beat the sweltering 122 degrees Fahrenheit (50 degrees Celsius) heat.

The rain is formed using drone technology that gives clouds an electric shock to ‘cajole them’ into clumping together and producing precipitation.

The UAE is one of the most arid countries on Earth, and it hopes the technique could help to increase its meagre annual rainfall.

And it is working. Video footage released by the UAE’s National Center of Meteorology shows monsoon-like downpours across the country which create a sheet of rain on the highways. 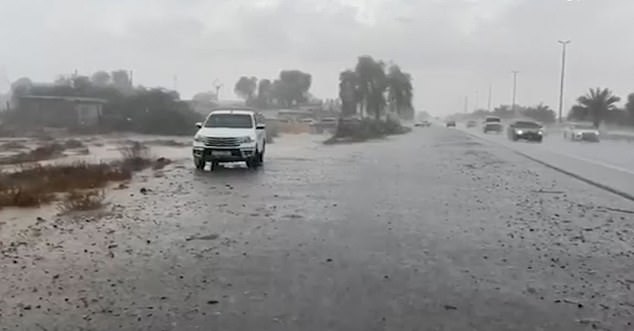 Waterfalls are also seen on the side of roads as drivers in SUVs struggle to navigate the torrential rain – despite the country being in the middle of a summer heatwave where temperatures have soared above 122F (50C).

The Center said the precipitation has been enhanced by a technique known as cloud seeding, and its purpose is to increase condensation in the hope that it might trigger a downpour.

The UAE’s cloud seeing operations are part of an ongoing $15 million (£10.8m) mission to generate rain in the country, which ranks among the world’s top 10 driest countries with an average rainfall of just three inches (78 millimetres) – 15 times less than what falls in an average year in the UK. 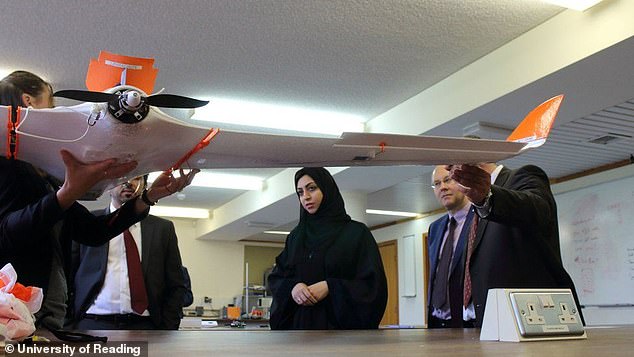 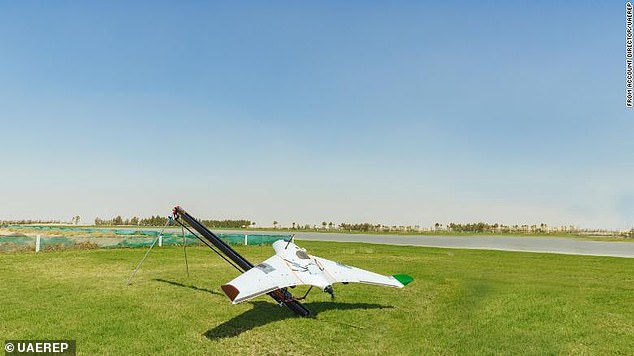 The rain is being created using drone technology in research led by experts at the University of Reading in the UK.

Professor Maarten Ambaum, who worked on the special project, told the BBC earlier this year that the UAE has enough clouds to create conditions which allow for rainfall.

The technology uses a drone to release electrical charges into the clouds, which helps the water droplets to merge and stick together to form precipitation, ‘like dry hair to a comb’.

‘When the drops merge and are big enough, they will fall as rain,’ Professor Ambaum said.

Alya Al-Mazroui, director of the UAE’s rain-enhancement science-research program, told Arab News in March: ‘Equipped with a payload of electric-charge emission instruments and customised sensors, these drones will fly at low altitudes and deliver an electric charge to air molecules, which should encourage precipitation.’ 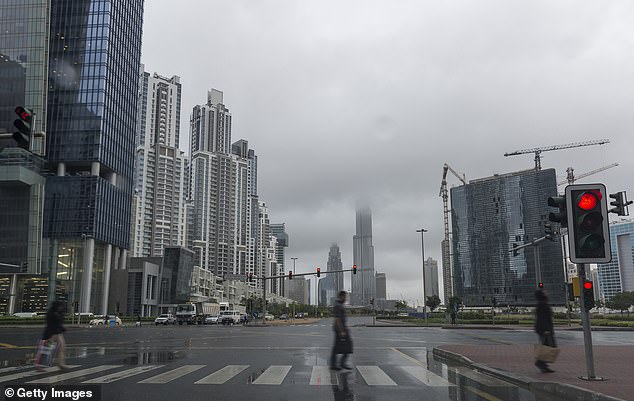 Professor Maarten Ambaum, who worked on the special project, told the BBC earlier this year that the UAE has enough clouds to create conditions which allow for rainfall

Among them is another cloud-seeding technology which launches salt missiles into clouds from planes.

‘As soon as they see some convective cloud formations, they launch us on a flight to investigate,’ said Mark Newman, deputy chief pilot at NCMS.

Speaking from the airbase that houses the four Beechcraft King Air C90 aircraft that are used for the country’s cloud seeding programme, Mr Newman said the team would then attempt ‘to seed the cloud’ if the conditions were right.

Mr Newman said summer is usually the busiest season for the missions.

At that time clouds form over the eastern Al-Hajar mountains which deflect the warm wind blowing from the Gulf of Oman.

The strength of the updraft determines the number of ‘salt flares’ fired as the plane explores the base of the forming cloud.

Not every cloud they seed produces rainfall, but they often do, according to Mr Newman.

‘It is fantastic… As soon as there is rain, there is a lot of excitement. We can hear the guys in the office are happy,’ he said.

Whether cloud seeding is effective at increasing rainfall, however, is still under investigation.

Many scientists doubt whether it has a noticable impact on rainfall levels.

US ski resorts in Colorado, however, reportedly use the method to induce heavier snowfall.

It was also used ahead of the 2008 Beijing Olympics opening ceremony to create a downpour elsewhere and keep the stadium dry.

This involved firing rockets packed with silver iodide crystals into rain clouds over the suburbs of Beijing. 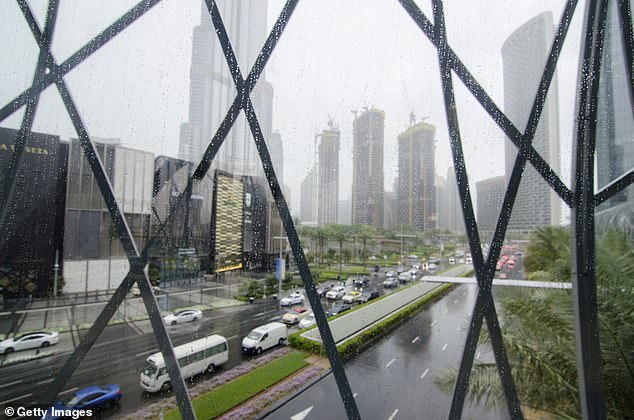 To cover its surging water needs, driven by rapid economic growth and a huge influx of workers, the UAE has resorted mainly to desalination – the process of removing salt from sea water to make it usable.

The Gulf country accounts for 14 per cent of the world’s desalinated water and is the second largest producer after neighbouring Saudi Arabia.

The country has 33 desalination plants that provided 42 per cent of its needs, according to a 2013 report by the environment and water ministry.

Rain triggered through cloud seeding is much cheaper than desalinated water, according to Omar al-Yazeedi, head of research at NCMS.

In 2010, four days of heavy rain induced by cloud seeding brought downpours equivalent to the nine-year output of a single desalination plant in Abu Dhabi, he said.

‘This shows that there is a huge amount of water that could be tapped… It is a source that can not be ignored,’ he said. 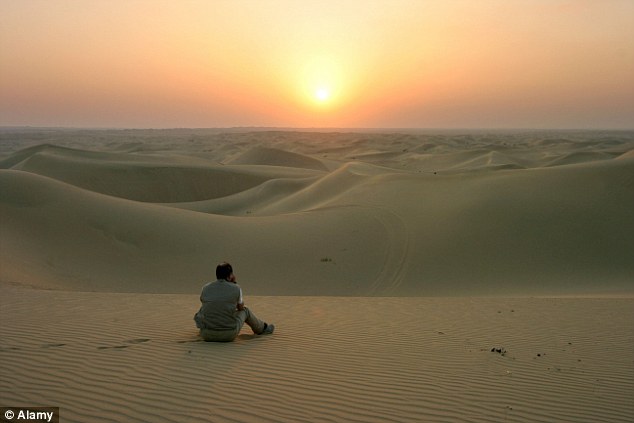 The oil-rich desert nation (pictured above near Abu Dhabi) ranks among the world’s top 10 driest countries. Its annual rainfall stands at 78 millimetres (three inches), 15 times less than an average annual rainfall in the UK. Cloud seeding is seen as being much cheaper than alternative methods of obtaining water by desalination

Studies show that cloud seeding can increase the amount of rain by between five and 70 per cent, depending on the quality of the clouds, he said.

The American Meteorological Society said in 2010 that despite some uncertainty over its effectiveness, ‘large potential benefits can warrant relatively small investments to conduct operational cloud seeding’.

The UAE is also looking into methods to preserve the rain that does hit the ground, instead of allowing it to quickly evaporate or flow off into the sea.

It has built dams and reservoirs to gather water that flood desert valleys.

The country has around 130 dams and levees with a storage capacity of about 120 million cubic metres (more than four billion cubic feet), according to the ministry report.

NCMS executive director Abdulla al-Mandoos said studies were being prepared to plan more dams and to protect water, aimed at directing rain ‘from the cloud right into the aquifer’.

‘We do not want to waste a drop of water,’ he said.