Trading platforms IG and AJ Bell knocked it out of the park with their latest results in an indication that the boom in amateur stock market dabbling is far from over.

IG posted record profits of £450million in the 12 months to May – a 52 per cent rise from the year before.

The number of active clients on its books rose by 31 per cent to 313,000 in a year that saw some of the most volatile, rollercoaster markets since the financial crisis as the Covid crisis plunged the world into panic.

Trading frenzy: The number of active clients on IG’s books rose by 31 per cent to 313,000 in a year that saw some of the most volatile, rollercoaster markets since the financial crisis

Crucially, while the number of new customers rose 39 per cent to 134,800, IG also reported that retention rates were roughly the same as before the pandemic.

Chief executive June Felix said: ‘We know we’ve been helped by volatility, but I’m confident we would have seen growth without it.’

Based on the upbeat results, IG has been able to upgrade its revenue forecasts for its core markets – which include the UK – to come in at 5 per cent to 7 per cent this year, up from previous guidance of 3 per cent to 5 per cent. 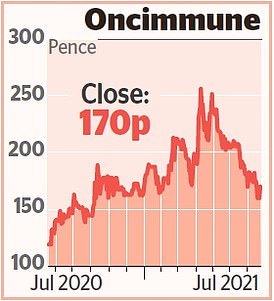 Investors cheered Oncimmune after the cancer specialist’s technology was used in a breakthrough Covid study.

Helped by Oncimmune’s technology, researchers at the Cedars-Sinai Medical Center in Los Angeles found ‘remarkable’ patterns for how the virus affects men and women differently.

The findings looked at how Covid stimulates the immune system and predicts how people respond to vaccines and therapies against the virus.

It could have an impact on how later generations of vaccinations are developed.

This was 30 per cent higher than in the same period of last year, it said in a third-quarter update to June.

Far and away the biggest riser on the FTSE 250 leaderboard was Morgan Sindall.

On another results ‘Super Thursday’ – which saw a deluge of corporate updates – the construction group rocketed 12.5 per cent, or 265p, to 2380p as it said its full-year results would smash expectations.

The Covid rebound has been much stronger than the company had been braced for – with all divisions performing well.

The jump in yesterday’s share price means co-founder and chief executive John Morgan’s stake is now worth a cool £83million.

A major theme in yesterday’s company announcements was, like for Morgan Sindall, one of the Covid rebound gathering pace.

Revenues also surged at construction supplier Breedon Group (up 5 per cent, or 5.2p, to 109.2p), while Howdens reported record sales and profits in the first six months of the year.

The trade kitchen supplier (up 2.8 per cent, or 24.2p, to 903.6p) said the new-found popularity of DIY, which began during the first lockdown, is still going strong.

There were encouraging signs that office-based work is also returning to normal after Workspace Group said demand for its space rose to pre-Covid levels during its first quarter.

Enquiries, lettings and occupancy were all up on last year, although that compared with the strictest UK lockdown, which saw white-collar workers forced to work from home.

Robinsons and J20-owner Britvic (up 1.3 per cent, or 12.5p, to 972.5p) said it had been helped by the relaxation of Covid rules on pubs and restaurants in the third quarter.

But it kept its guidance, explaining that it has not yet got back to selling the same amount of its drinks as before the pandemic.

It confirmed this after the market closed, saying it wants to raise up to £40million. The firm (down 1.4 per cent, or 5p, to 360p) said it wanted to use the money to expand rather than to plug any holes in its finances.